His ascent of the world's tallest mountain was in 2012. It says so on the internet, reported by the International Cricket Council, the England and Wales Cricket Board and Cricket Australia.

"No," he told BBC Sport. "A couple of years ago, when I first started with Scotland, we had a bit of a joke. Somehow it got misconstrued, put on the website and it spiralled out of control."

So out of control in fact that Wardlaw, who made his Scotland debut in 2013, was attracting more attention for his fictitious mountaineering than he was for his work with a cricket ball.

"It got totally out of hand," said the 29-year-old. "I had people from Nepal tweeting to say 'good luck, I'm sure it won't be as tough as climbing the mountain'. 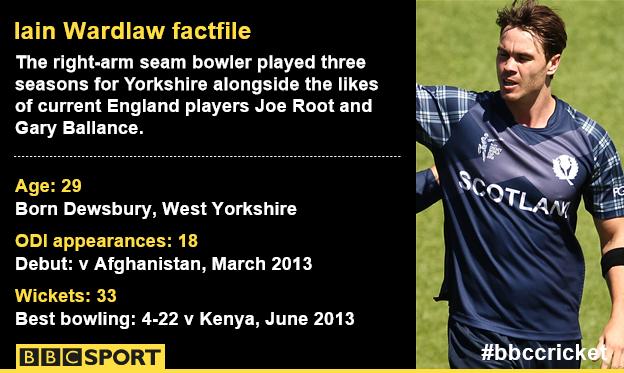 "I was thinking 'where's this come from, how can I get out of it?' I was trying to keep as low a profile as possible.

"The rest of the team were pushing me to come out in the media, to put my hands up and say sorry. It was just a joke that had gone too far."

In the end, it was Scotland captain Preston Mommsen who set the record straight after their first match of the World Cup, a creditable three-wicket defeat against New Zealand.

Such was the love of the myth, Mommsen's admission was reported all over the world, with the skipper conceding that his squad are "a pretty boring bunch".

But, again, that's only a half-truth, especially in the case of Wardlaw, who has enough of a back-story not to need tall tales of scaling tall mountains.

Born in Yorkshire to a Scottish father, he comes from cricketing stock - his sister Helen is an off-spinner who played three Tests for England women.

Wardlaw himself was a late-comer to the professional game, being spotted by Yorkshire at the age of 25 playing club cricket in the Bradford League.

"I was working full-time for a design agency as a sales and account manager," said Wardlaw.

"It happened so quickly. I played a few trial games and in the space of about three weeks I'd signed my contract and was playing."

Wardlaw made his first-class debut in the Roses match against Lancashire in 2011 and, the following year, played in the Champions League Twenty20, dismissing India captain MS Dhoni.

"I was just trying to make the most out of everything and enjoy it," he said. "I had a smile on my face every day that I was playing cricket. I'm fortunate. We're privileged to do what we do."

Wardlaw was released by Yorkshire before the 2014 season but agreed a central contract with Cricket Scotland in the run-up to the World Cup, which brings us to a grey day in Christchurch, 24 hours before a meeting with England.

Not only is he also eyeing an upset that would push England's so-far dismal tournament to the brink of termination, but also the opportunity to get one over his former Yorkshire team-mates Joe Root and Gary Ballance.

"I spent quite a few games playing with Rooty and Gaz," said Wardlaw, who has taken 33 wickets in 18 one-day internationals at an average of 23.72. "It'll be fun to get on the park with them.

"They always had the talent, but what people don't see is how hard they work behind the scenes. They were always the last people in the nets batting, getting throw downs, working on their own games.

"Gaz probably played three years non-stop cricket, going back and forth to Zimbabwe. He benefited from the whole experience and is doing well now."

After two heavy defeats in their opening two matches, England will arrive at the Hagley Oval knowing their third match of the World Cup is far more important than any of their three previous one-day internationals against Scotland.

Wardlaw, though, is hoping that England have been softened up by their chastening losses against Australia and New Zealand and identifies a perfect chance for Scotland to earn their first victory over a Test-playing side.

"It will be difficult because they will come out and try to prove a point," said Wardlaw. "But I don't think there's any better time to play them than now.

"We feel confident as a group and they have been under pressure - that can only help our situation."

Wardlaw also points to the advantage of having a former England one-day captain on the coaching Scotland team.

Paul Collingwood's mind games over the England-Scotland clash started before Eoin Morgan's team were thrashed by New Zealand, with the three-time Ashes winner suggesting that England coach Peter Moores could lose his job if results did not improve.

"Paul brings a general calmness, especially going into these competitions," said Wardlaw. "He's great on the mental side of the game, keeping everyone relaxed and not worrying about the opposition."

The mischievous point out that Scotland's performance against New Zealand - 142 all out, taking seven wickets - was much better than England's against the same opponents - 123 all out, the Kiwis racing to the target two wickets down in 12.2 overs.

Wardlaw, who took 3-57 against the Black Caps, says those facts cannot be used as a barometer but insists the Scots did prove that "they can compete" at the highest level.

However, he is willing to reveal hopes that a match-winning performance against England would make him famous for his cricket, rather than an Everest expedition that never happened.

"I'd like to think so," he concluded. "If I get a few wickets, hopefully that will be swept under the carpet."