England's eight-wicket World Cup defeat by New Zealand in Wellington was the most one-sided one-day international between Test-playing nations that I can remember seeing.

It was almost too bad to put into words. To be bowled out for 123 and then see that chased down in 12.2 overs is extremely chastening for Eoin Morgan's side. They will feel utterly embarrassed.

There can be no excuses, especially as they won the toss and batted first on a good pitch.

After the match, Morgan said that the ball swung more than he thought it would but, though Tim Southee was excellent for his 7-33, the movement was nothing excessive or different from what England should be used to.

To be fair, we knew the first two matches against Australia and New Zealand would be the most difficult that England would encounter, but the margin of the defeats is a cause for concern.

And, as a result of losing both their openers, the amount of leeway England have is tightening.

They can lose a total of three matches and still qualify for the quarter-finals, but the likes of Bangladesh, Afghanistan and Scotland, whom they play in Christchurch on Monday, will now see England as entirely beatable.

In addition, other things look to be conspiring against England. The weather in Brisbane is likely to give Bangladesh an abandonment point they probably would not have got had they played Australia.

After England's defeat by Australia in Melbourne, we said we wanted to see an improvement in the team's bowling and fielding. However, the fact they were rolled for 123 means we did not get the chance - we are none the wiser.

Great credit should be given to Southee, who is quicker than he looks and swings the ball just enough. He is a very talented cricketer.

But the way England played him was poor. I'm not pinning this performance on Gary Ballance, who has not played a lot of cricket, but he looks well short of his best. I'd like to see Alex Hales take his place against Scotland.

As for Morgan, who had managed only two runs in his previous four innings, a score of 17 will do little to get the monkey off his back and the manner in which he fell was disappointing.

I heard him say after the match that the brilliant catch Adam Milne took at long-on was only a half-chance, but it was more than that. A loose shot sparked a collapse of seven wickets for 19 runs.

After that, the destructive Brendon McCullum was always likely to play in the blistering manner he did when faced with such a small target.

Even then, those who saw his innings will remember it for a long time. The fastest half-century in World Cup history and 77 from 25 balls was simply breathtaking.

Will England make changes to the bowling attack that was destroyed by McCullum? Steven Finn, with 0-49 from two overs, would seem the most likely candidate to make way.

The fact is, though, that England have very little to time to put things right. There are only two days before the Scotland game, one of which will be spent travelling, the other will involve a light training session.

In some ways, that might be no bad thing. They simply have to get out there, put in a dominant performance and beat Scotland by a handsome margin.

But can they pick themselves up from the harrowing events of Wellington and be in the right state of mind for the Scots and the matches against Sri Lanka, Bangladesh and Afghanistan that follow?

In theory, England can still win the World Cup. But how much damage has already been done?

Listen to more reaction on the TMS podcast. 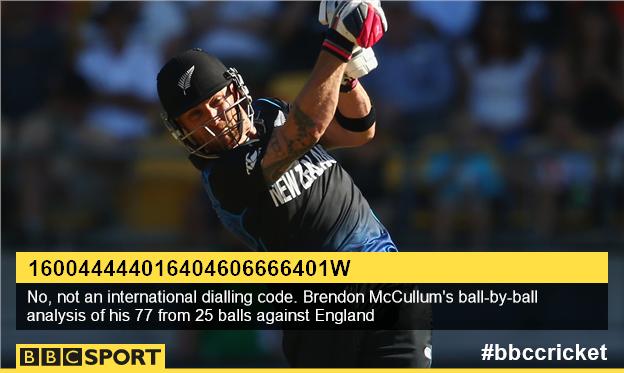