England will not make wholesale changes to the team despite Friday's chastening eight-wicket defeat by New Zealand in Wellington, says captain Eoin Morgan.

England are bottom of Pool A and could be on the brink of elimination if they are beaten by Scotland on Monday.

"We don't want to panic and make three or four changes," said Morgan.

"That's not what I'm about - just because we were outperformed, it doesn't mean I'll be binning anyone for Monday."

How bad were England?

BBC cricket correspondent Jonathan Agnew described it as one of the most one-sided one-day games between Test playing nations that he had ever seen. England's defeat by New Zealand in the day-night game was concluded before the lights at the Wellington Regional Stadium were even turned on.

"These first two games we knew would be difficult, but there's no way we should be beaten by this amount," continued Morgan, who replaced Alastair Cook as one-day captain in December.

New Zealand wrapped up the win with 226 deliveries to spare, England's joint-heaviest defeat in ODIs in terms of balls remaining.

How good were New Zealand?

New Zealand captain Brendon McCullum says his side put on "an incredible performance" and told BBC's Test Match Special that he intended to enjoy "a quiet beer" in the dressing-room.

"We wanted to bat first too and it shows the ability of our bowlers to get swing through the air," he said.

"We have got some guys on the sidelines too, so we're lucky we've got this strength in depth." 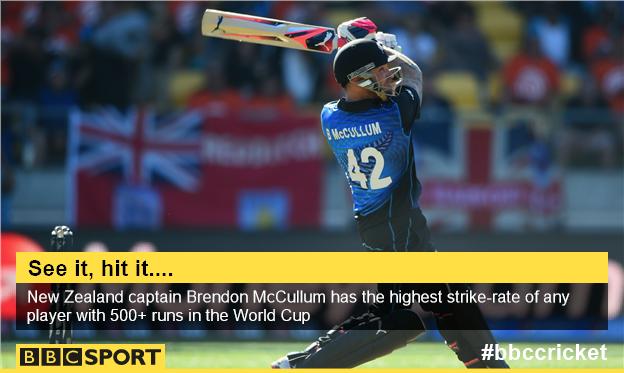 It took New Zealand just 18 minutes to score their first 50 runs in their run chase against England.

McCullum's 54 off 18 balls is the fastest half-century in World Cup history, breaking his own record of 52 in 20 balls.

Pelted in the stocks and a shambles

Agnew says England's eight-wicket defeat in Wellington was "almost too bad to put in to words".

"Eoin Morgan said that the ball swung more than he thought it would but, though Tim Southee was excellent for his 7-33, the movement was nothing excessive or different from what England should be used to," he said.

Former England batsman Geoffrey Boycott says England are even more culpable because the conditions at the Wellington Regional Stadium were conducive to batting.

"This was not an uncovered or grassy pitch seaming all over the place - this was a flat 270-pitch minimum and they made a right mess of it."

"England will want the world to open and swallow them up tonight, but I have been so impressed with McCullum. He sensed that England were a wounded animal and went for the kill," he told Radio 5 live.

"A year ago Paul Downton described Peter Moores as the 'coach of his generation'," he wrote on Twitter.

"That's one way to make sure you don't have to bowl at death of the innings... lose in 13 overs!"

Moores' predecessor as England limited-overs coach Ashley Giles contrasts England's preparation with that of New Zealand, who he says have been planning for the tournament for four years.

"England changing their batting line-up for the first match was a bit odd, moving James Taylor to six, [whereas] each New Zealand player knew their roles coming into the World Cup," he told BBC Radio 5 live.

Former England all-rounder Derek Pringle, who played in the 1992 World Cup final, believes the team risk losing the backing of their supporters.

"England's shirts have these dark stains like the players have been pelted in the stocks, a response some fans no doubt feel would be apt," he wrote on Twitter.

"New Zealand were outstanding as Tim Southee put on an exhibition of swing bowling. KP, Stokes & Bopara?" the Australian wrote on Twitter.

Listen to more reaction on the TMS podcast.

Can England reach the knockout stages?

England have lost their opening two matches of Pool A, with Friday's loss in Wellington following a 111-run defeat by Australia in Melbourne on Saturday.

However, Australia and New Zealand began as favourites to top Pool A and, with four group matches remaining, England can still reach the quarter-finals.

They next face Scotland in Christchurch on 23 February, then meet Sri Lanka on 1 March, Bangladesh eight days later and conclude their Pool A campaign against Afghanistan on 13 March.

The match against associate side Scotland, who have former England skipper Paul Collingwood on their coaching staff, now takes on an even greater importance for Moores' side.

Scotland are searching for a first World Cup victory, having lost their opening match of the tournament to New Zealand and all eight matches across the 1999 and 2007 campaigns.

The bookmakers still make England odds-on to qualify for the last eight, but their odds on winning the tournament itself have gone out to 20/1.