England suffered a humiliating eight-wicket thrashing by New Zealand as Tim Southee became only the fourth man to take seven wickets in a World Cup match.

Southee's 7-33 saw England blown away for 123, the last seven wickets falling for 19 runs.

Brendon McCullum then smashed an 18-ball half-century, the fastest in World Cup history, to propel New Zealand to their target in just 12.2 overs.

That equalled the shortest ODI chase against England, in a match that lasted just 45.4 overs in total.

Only when McCullum was bowled by Chris Woakes for a 25-ball 77 did England avoid the ignominy of being beaten before the scheduled tea interval.

A third win in as many games has all but secured New Zealand's place in the quarter-finals, while two defeats from two means England can perhaps afford only one more from their remaining four matches if they are to qualify.

They face Scotland in Christchurch next from 22:00 GMT on Sunday before matches against Sri Lanka, Bangladesh and Afghanistan.

Eoin Morgan's team attracted criticism from the likes of Geoffrey Boycott and Graham Gooch following their opening loss to Australia, but this most one-sided of hammerings was far more abject.

Defeats against both co-hosts were probably expected before start of the tournament, but it is the manner in which England surrendered in Wellington that suggests their World Cup is already in disarray.

On a blameless surface, they were taken apart by Southee, who was as brilliant as England were woeful, pitching the ball up at good pace and finding late swing.

Some resistance came from Joe Root, the last man out for 46, his stand of 47 with captain Morgan the only period of calm in the match. 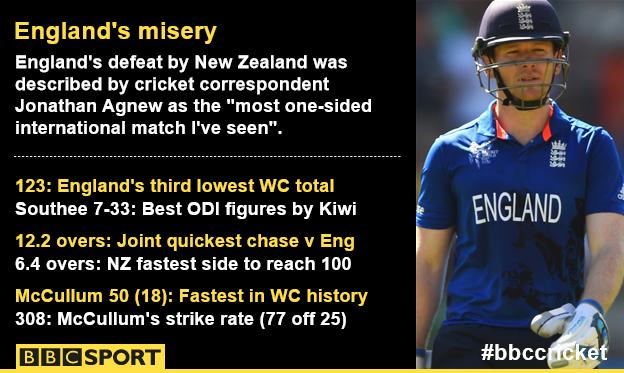 Morgan, who had managed only two runs in his previous four ODI innings, at least made a rather nervy 17, but his needless loft down the ground to be brilliantly caught at long-on by Adam Milne off Daniel Vettori began the carnage.

Southee, who had earlier bowled the flat-footed opening pair of Ian Bell and Moeen Ali, ran through the England middle and lower order.

James Taylor and Chris Woakes were bowled either side of Jos Buttler edging behind, while Stuart Broad looped a catch to mid-off before Steven Finn was held at first slip.

They had to field right away, with McCullum then piling on the misery in a violent assault on a bowling attack that had no answers.

He cut the second ball he faced, from Broad, for six, the first of seven maximums carved over the off side.

Using his feet to both advance and make room, the New Zealand captain hit Finn for four sixes in an over, the pace bowler conceding 49 runs from his spell of two overs.

The fastest one-day hundred of all time was still possible when McCullum missed a Woakes full toss to depart with a strike-rate of 308.00, beating his own record for the highest in any World Cup innings of 50 or more.

It ensured the bizarre sight of the players leaving the field for 45 minutes when New Zealand required only 12 runs to win.

In the 20 legitimate balls after they returned, Woakes bowled Martin Guptill, but, in what was supposed to be a day-night match, the floodlights went unused.

In winning in 12.2 overs, New Zealand equalled the record against England set by Australia when they chased 118 at Sydney in 2003.

Listen to reaction on the TMS podcast.