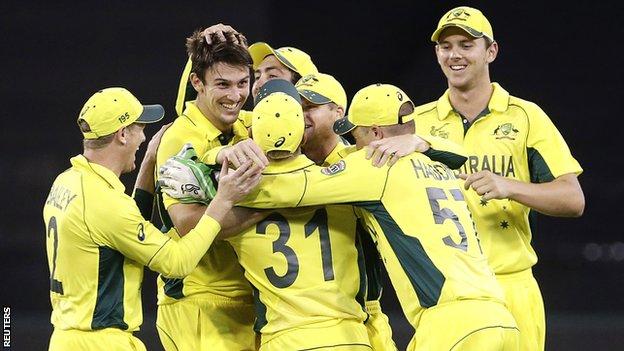 England were outclassed by an impressive Australia in a 111-run defeat on the opening day of the World Cup in Melbourne.

Aaron Finch, dropped on nought by Chris Woakes in the first over, hammered 135 and Glenn Maxwell a 40-ball 66 to propel the co-hosts to 342-9.

Chasing the biggest score they had ever conceded in a one-day international against Australia never seemed likely for England and a top-order collapse further demonstrated the gulf in class.

Mitchell Marsh took 5-33 as England were bowled out for 231 despite an inventive unbeaten 98 from James Taylor.

Although an expected defeat by the tournament favourites does little damage to England's hopes of reaching the quarter-finals, the manner of the reverse should provide cause for concern.

They were substandard in the field, lacked control at the end of the Australia innings and were saved from their heaviest World Cup defeat by Taylor.

The most costly mistake was made by Woakes, dropping a simple chance above his head at square leg off James Anderson to reprieve Finch from only the fifth delivery.

The right-hander made the most of his let-off to dominate the innings through flicks off his pads, brutal pulls and powerful hits down the ground.

But the biggest disappointment was England's death overs, which featured too few yorkers, too many slow bouncers and Maxwell's clean striking.

Steven Finn at least claimed the first World Cup hat-trick by an England bowler from the final three balls of the innings, all skied catches.

Bowling first on a flat pitch in the hope the overnight rain would result in some assistance, England reduced Australia to 70-3 by Stuart Broad and Woakes finding movement on a good length.

The lesson was not learnt, though, and George Bailey was allowed to settle on a diet of short bowling, making 55 and rebuilding in a stand of 146 with Finch.

When Finch and Bailey fell, England looked like they might check Australia's progress, but Maxwell provided the late carnage. The final 10 overs yielded 105 runs, including 76 off the last six.

A successful chase looked fanciful, but England's tepid reply never had them in the game.

As Australia hit their lengths and held their catches to provide the visitors with a lesson, one by one, England's batsmen holed out.

Moeen Ali started the rot by pulling Mitchell Starc to mid-on, before Marsh's medium-pacers took over.

Gary Ballance - in the side for Ravi Bopara - flicked to short mid-wicket, Ian Bell pulled to deep mid-wicket, Joe Root top-edged and captain Eoin Morgan toe-ended a pull to diving wicketkeeper Brad Haddin for a third successive duck against Australia.

However, Taylor, dropped down the order to accommodate Ballance, did find a way to score by running hard and capitalising on what loose bowling was on offer.

He nudged towards a maiden century in the company of last man Anderson, but was given out lbw to Josh Hazlewood, only for the decision to be overturned on review.

But, from the same delivery, Anderson was run out and, amid confusing scenes as the TV replays were consulted, England's fate was sealed.

The International Cricket Council's later admitted that an error had been made and that the ball should have been declared dead, but the decision was incidental to a one-sided result.

On Friday they face co-hosts New Zealand, who beat Sri Lanka by 98 runs in the tournament opener in Christchurch earlier on Saturday.