Bell's 141 in the three-wicket tri-series defeat by Australia in Hobart took him to 5,136 runs in the format, surpassing Collingwood's 5,092 runs.

"I'm sure there will be plenty more hundreds and he'll amass a huge total of one-day runs," said Collingwood.

Bell, who passed Collingwood's total when he reached 98 in England's 303-8, reached his total in 32 fewer innings.

The Warwickshire batsman had struggled for runs last year but returned to the ODI side for the tri-series with Australia and India after Alastair Cook was removed as captain following the series defeat in Sri Lanka in December.

He smashed 187 from 145 balls as England beat the Prime Minister's XI by 60 runs in Canberra on 14 January and also scored an unbeaten 88 in the nine-wicket victory over India in Brisbane on 20 January. 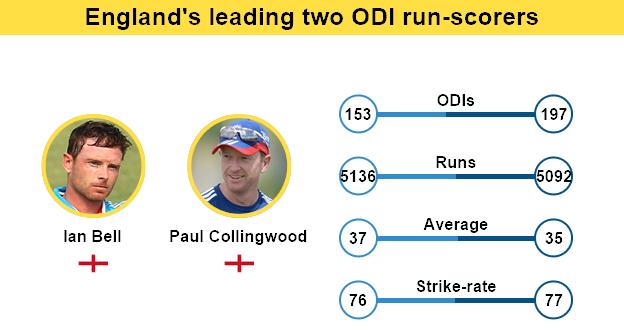 Collingwood, who will coach Scotland during the World Cup, told BBC Radio 5 live: "The runs have come at the right time for him. His form has hit a real purple patch just a few months after he must have wondered if he would go to the World Cup.

"Now his form has guaranteed him to open the batting all the way through the World Cup and that is fantastic.

"He has come out and proved he can do the job at the top of the order. It seems the harder and newer the ball, the better he plays.

"It is a great sign for England because he can get the big totals and if England are to win they need totals of 300-plus."