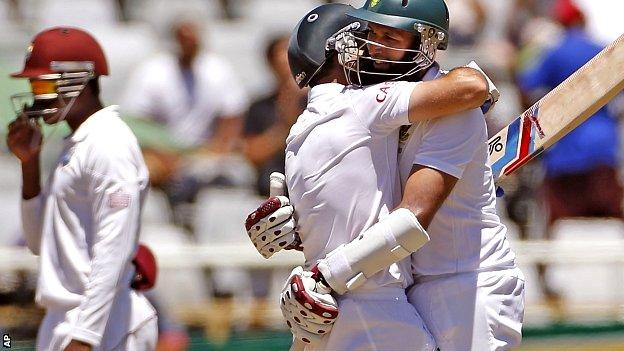 South Africa beat West Indies by eight wickets in Cape Town to win the third and final Test and take the series 2-0.

The home side began the final day on 9-1, needing a further 115 runs for victory, and Dean Elgar guided them to their target with 60 not out.

Having won the first Test and South Africa took the series to retain the number one Test ranking.

A West Indies collapse on the fourth day, when the tourists crashed from 182-3 to 215 all out, left South Africa requiring just 124 for victory.

It was slow going as the Proteas failed to score any runs off the first 44 balls of the day, and Faf du Plessis then fell for 14 just after the hour mark.

South Africa captain Hashim Amla made sure there were no more alarms though as he scored 38 not out to accompany Elgar to the end.

Meanwhile, Proteas opener Alviro Petersen, who was out for a duck in the second innings after scoring 42 in the first, announced his retirement from international cricket after the game.

His highest Test score, 182, came against England at Headingley in 2012.

"I intend playing county and franchise cricket for the next three years and also concentrating on my foundation and my cricket school."

Petersen has had spells in English county cricket with Somerset, Glamorgan and Essex, and his departure from the international scene opens up the chance for him to return to county cricket as a Kolpak player.