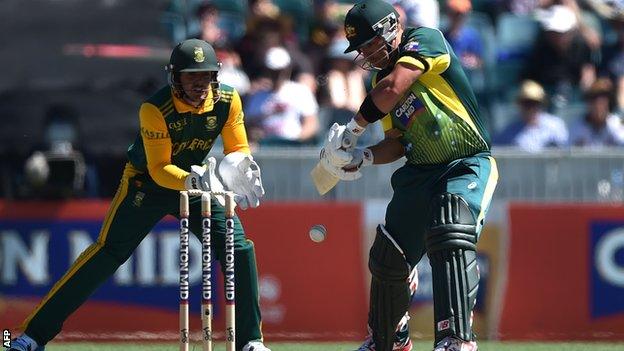 A century from opener Aaron Finch helped Australia to a 73-run victory against South Africa in the third one-day international in Canberra.

Finch shared 118 in 20 overs with David Warner (53) and struck nine fours and three sixes in his fifth ODI hundred.

Steve Smith was named man-of-the-match after his unbeaten 73 from 55 balls helped the home side to 329-5.

Hashim Amla made 102 but with Imran Tahir absent, South Africa closed on 256-9 and trail 2-1 in the series.

Skipper AB de Villiers fired 52 from 34 balls, but with 104 needed from 12 overs, Amla was the fifth wicket to fall and the last five departed for 30 runs, Tahir unable to bat after suffering an injury in the field.

The next match is another day-night encounter, this time at the Melbourne Cricket Ground, on Friday.