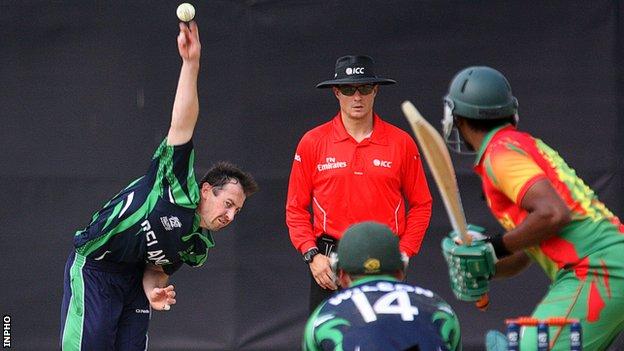 Alex Cusack is included in Ireland's 18-man squad for their training camp in Australia and New Zealand.

The paceman, 33, has been injured since May but will travel with the squad next week for the month-long acclimatisation ahead of the 2015 World Cup.

Batsman Ed Joyce is excused from the eight-game trip in order to rest and recover from the county season.

"Ed has had a number of niggling injuries over the summer as well as a long-term degenerative hip which he has been managing well for some years with the support of medical staff at both Sussex CCC and Cricket Ireland," said Ireland Performance Director Richard Holdsworth.

"He is 36 years old now and if he is to continue to play at the highest level we need to carefully manage his programme."

Ireland coach Phil Simmons believes it is the right decision to take Cusack on the tour.

"He has been in a long period of rehabilitation and is fit to train now," said Simmons.

"He will be back training and bowling this week and part of his continued rehabilitation will be in Australia with the hope he is able to play towards the latter half of the tour in New Zealand.

"Alex has been injured before tournaments in the past but topped our bowling averages, so the selectors feel given his past record he deserves the chance to prove he can be fit for the World Cup, and this is the only tour before the final squad of 15 is selected in early December."