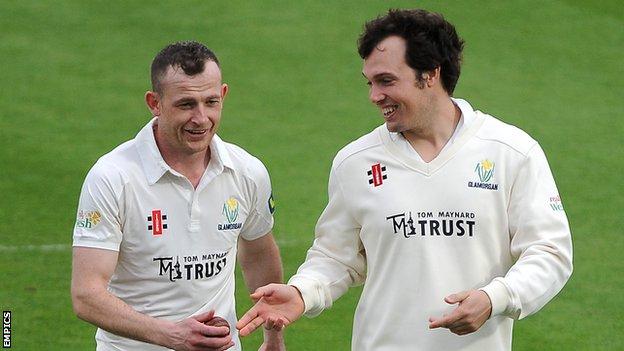 Wagg's unbeaten 116 from 183 balls, his first century of the season, denied Kent any chance of a run-chase.

When Wallace was caught at gully off Claydon, Glamorgan had a lead of 235, but there was to be no lower order collapse as Dean Cosker (25) and Kieron Bull (12) kept Wagg company for a combined total of 31 overs.

The draw left Kent in fifth place, 54 points behind Hampshire in second but with a game in hand, while Glamorgan remained eighth, with only two wins so far this summer.

"I'm glad to have got over the line to three figures, but equally I'm disappointed not to have gone on to score a big one that would have given us a better chance of enforcing the victory.

"The pitch lost a bit of life as the game went on and although we had them where we wanted them going into today, we couldn't quite capitalise on our chances.

"There was no talk of a deal because we felt we could win this game the right way, but it just didn't quite happen for us."

"We were really up against it when we lost two early wickets, but Wallace hung in there well, David Lloyd showed some maturity for a youngster in chipping in with 41 then Waggy stole the show.

"People will look at the scorecard in the papers and think this was a dull old draw, but either side of lunch we were batting for our lives out there.

"If we'd lost one or two quick ones after lunch it would have been an easy chase and an easy win for Kent.

"We know Waggy can bat and it's great to see him bat with focus and play so well."

"Kent may have started the day with high hopes of a promotion-push victory, but saw those drift away by mid-afternoon as Glamorgan wickets failed to be taken quickly enough on a placid Canterbury pitch.

"Draws can be entertaining though and those that stayed will be able to regale others with stories of two overs from Rob Key and the captain going behind the stumps for one ball of wicketkeeper Sam Billings' slow right-arm from the Pavilion end. Great fun."