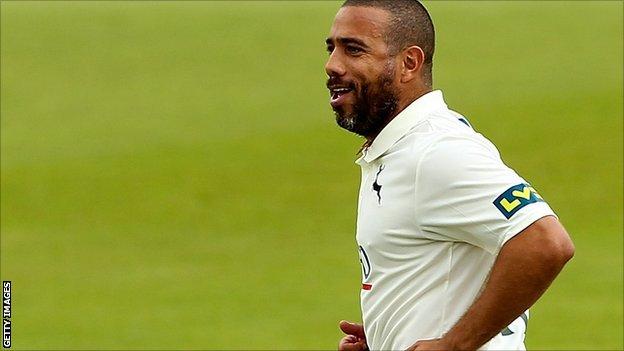 Hampshire have signed Nottinghamshire seamer Andre Adams on a short-term deal for the 2015 season.

New Zealander Adams, 39, will spend three months with Hampshire before taking up a coaching role in Auckland.

He joined Notts in 2007 and helped them win the County Championship in 2010.

"The intention was to finish my professional career here, but I've got a small gap at the start of next season in my coaching regime which is three months to do what I want," said Adams.

"The opportunity to work in a different club and environment is a massive part of my learning curve.

"I'll get to put things into play that I've learned here and at Auckland. It'll allow me to grow."

Adams, who had intended to retire at the end of the season, has taken 334 first-class wickets at an average of 24.18 for Nottinghamshire and Hampshire director of cricket Giles White hopes he can have an influence at the county for the duration of his stay.

"He's got coaching commitments, so his next career is going to be in coaching in Auckland," White told BBC Radio Solent.

"Initially we have said three months and we will see where it takes us.

"If you are going to use a player like Adams then you want to use for him at the beginning of the season when he can affect the outcome of four-day games."