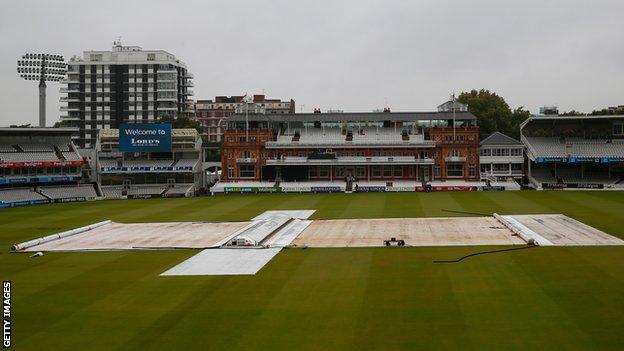 England have amassed five points in the ICC Women's Championship after the third match of the one-day series against India at Lord's was abandoned.

The scheduled 10:45 BST start at Lord's was delayed and, with further rain forecast, the match was called off.

England take one point from the match towards qualification for the 2017 World Cup, plus four points from their two previous wins in the series.

The tourists previously won the one-off Test match at Wormsley by six wickets.

"India showed what a strong side they are during the Test match and I am really pleased with how quickly we bounced back from that disappointment and delivered when it counted," said England captain Charlotte Edwards.

The ICC World Championship involves the top eight-ranked women's teams in the world and over the next two years all teams will play each other in a three-match ODI series either at home or away.

The top four teams will qualify for the Women's World Cup in England in 2017.

Countries finishing in the bottom four will take part in the Women's World Cup qualifying tournament in early 2017 against teams from the ICC's regional structures to determine the final four participants for the event.

England will next play a three-match Twenty20 series against South Africa starting on 1 September in Chelmsford, with live commentary on the BBC Sport website.