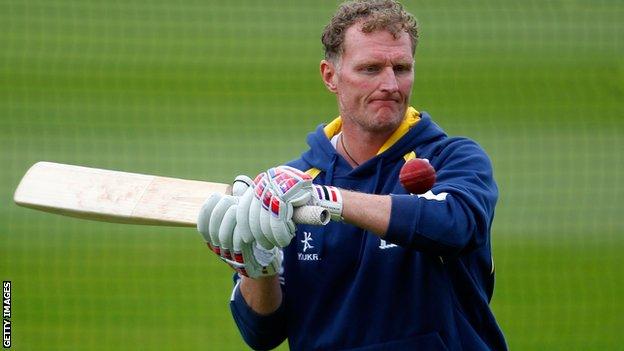 Birmingham Bears director of cricket Dougie Brown admits that his side "burgled" their way into Saturday's T20 Blast Finals Day.

The Bears, who face Surrey in the semi-finals, beat Essex in the last eight after reaching the knockout stages by winning their last three group games.

"We were behind the eight ball in the qualifying group," he told BBC Sport.

"And we've burgled it a little. But we could find ourselves going into Saturday as the form team."

The Bears finished runners-up to Surrey in Twenty20's inaugural year in 2003 but this is the first time they have reached Finals Day since, despite it being the sixth time that their Edgbaston home has hosted the showpiece.

"Edgbaston will be a complete sell-out," said Brown. "And it will be brilliant to finally get to perform on Finals Day on our own ground.

"It's been a long time coming, but we're very excited."

The coincidence that his side should have to start the day by playing Surrey in the semi-final is not lost on the Bears coach.

As a player, both on Finals Day at Trent Bridge 11 years ago and then again at the quarter-final stage in 2005, Brown was twice on the losing side against them.

"All I can remember is not turning up for the final in 2003," he recalls. "We lost the toss and lost the game.

"We were invited to bat first on a poor wicket and did not get nearly enough, then the dew came up and turned it into a much better track to bat on.

"As for 2005, that was a lot tighter. We thought we needed four to win off the last ball, when in fact we only needed three.

"It went for two and both teams thought that was that, but it was a Duckworth-Lewis game, it turned out we had all got it wrong, and it went to a bowl-out - and even that went to sudden death."

Now he finds himself at the helm, having seemingly found an answer to the perennial question of why the Bears have so badly under achieved over the past decade at Twenty20 cricket.

But, although they did only scrape through their qualifying group before winning their first quarter-final in seven attempts at Chelmsford, Brown insists that this summer's late blooming was actually no real surprise.

"We had to win our last three games to qualify and then we needed Notts to do us a favour by beating Yorkshire," added Brown.

"But we always felt we were playing good cricket and doing the right things. And we trusted our methods.

"In the four defeats we had, all of them were very close and could have gone either way. The only one we were well beaten in was at Worcester."

Brown, in his second season in charge since taking over from Ashley Giles, has had his problems to contend with this summer - most notably the loss of skipper Jim Troughton, whose back injury finally forced him to announce his retirement this week, and the assimilation of Jonathan Trott back into the ranks after his stress-related illness.

But the Bears are still in with a chance of repeating their 2012 title win in the County Championship and are through to the last eight of the One-Day Cup.

The rebranded Birmingham Bears' cause will be helped by the the return of batsman Ian Bell and all-rounder Chris Woakes from England duty as they try to end 11 years of failure in this competition under the Warwickshire flag.