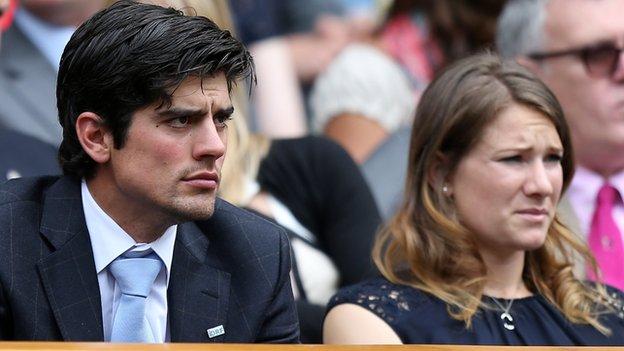 Alastair Cook said his wife, Alice, convinced him to remain as captain and lead England to a comprehensive series victory over India.

Cook admits he considered his position after being beaten by Sri Lanka at Headingley and then by India at Lord's.

England eventually beat the Indians 3-1 to help banish memories of a 5-0 Ashes whitewash in Australia.

"Without my wife, I don't think I'd be standing here as captain," an emotional Cook, 29, told BBC Test Match Special.

"You don't often say things like that - I don't know why I just have - but it's the way I feel.

"You can bare your soul quite often to Alice and she's very good at getting me back on the straight and narrow.

"That fourth night at Headingley was a tough place because we had let a winning position slip. Lord's was also very tough - the way we lost there in conditions that were suited to us.

"But I'm quite stubborn - I believe in my ability. I stuck in there through the tough times. Sport tests your character and to bounce back as a team is testament to our character."

Defeat at Lord's extended England's winless run to 10 Tests and prompted widespread calls for an out-of-form Cook to stand down.

But the left-handed opening batsman bounced back with three fifties in four innings as England beat India at Southampton before completing a remarkable comeback with victories inside three days at Old Trafford and The Oval.

"I remember saying when we were 1-0 down that I still thought we were going to win the series," said Cook.

"I had a lot of confidence in the talent and skill we had in the dressing room but I didn't think we'd win quite as emphatically as we have done.

"English cricket needed a series win and to deliver like we have delivered puts a big smile on our face.

"The bowlers all took wickets and almost all the batters scored runs, so it's almost the perfect game.

"We haven't felt like this for a long time. We were laughing out there. You don't get many days like that.

"We have to enjoy it and hope it's the start of a long road back."

England seamer James Anderson was named man of the series after taking 25 wickets.

He said he was motivated to do well by India's decision to report him to the International Cricket Council (ICC) for allegedly pushing and abusing Ravindra Jadeja during the first Test at Trent Bridge.

Anderson was eventually cleared of misconduct by an ICC tribunal.

"At Southampton, when stuff was going on before and after the game, the fact that we made such a conscious effort to concentrate on the cricket not only helped me but also the rest of the team," he added.

"Since then, we've not let India back in the series, which is credit to everyone who has played."

Listen to Jonathan Agnew and Geoffrey Boycott review each day's play on the TMS podcast.