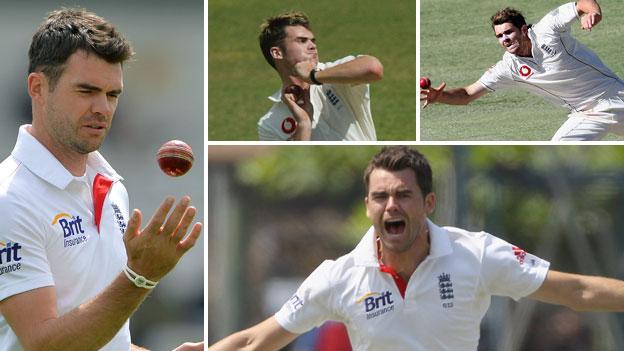 Some 667 men have played Test cricket for England, but when it comes to taking wickets, one man stands alone.

It has been 12 years since Anderson made his Test debut and his road to the record has not been without mishap.

This is his story - from Burnley beginnings to beating Botham's record - told by those who know him best.

'At the age of 16 he got people talking'

James Anderson set out on the path to bowling greatness in his home town of Burnley as he worked his way up to the cricket club's first team. But it was a shrewd piece of scouting by the mother of one of his team-mates that alerted Lancashire to his potential.

"James was part of a group that progressed through the junior sides into the seniors, being picked in the first team at 15," recalls Burnley first XI batsman Michael Brown, one of five of Anderson's team-mates who went on to play professionally.

"He was athletic and had a nice action, but there wasn't anything to suggest he would go on to bowl at 90mph and swing it both ways. But each year he would come back taller and stronger, a yard quicker.

"It was at the age of 16 that he got people talking. He got Roger Harper, the great former West Indies player and a league legend, out first ball and then, in the following week, he bounced out Martin van Jaarsveld, who would go on to play Test cricket for South Africa.

"He had been overlooked by Lancashire, but my mum Val gave one of the coaches a call to say he deserved another look. Jimmy got into the set-up and, from the age of 16 to 18, the improvement from being a young medium-pace bowler to someone who was swinging it like he did was phenomenal."

'He said zip all for two and a half years'

John Stanworth was the Lancashire academy coach who took the fateful call from Val Brown. He remembers Anderson as a bright young talent who was painfully shy.

"Val Brown generally used to stay in the background so for her to bring Jimmy to my attention was quite powerful," says Stanworth.

"We brought him for an indoor net and I was taken by his pace and late swing. I didn't think there and then that he was going to be an England bowler but I knew there was a talent there that I couldn't believe I had not seen before.

"The other notable thing was that he said absolutely zip all to me for the next two and a half years, apart from 'OK Stanny'. He was so introverted that to see him now with a reputation - probably deserved - for being in batsmen's faces is a transformation. He was quiet, he was unassuming and quite shy, but his development was quite rapid.

"Straight away you could see he had real potential but I didn't see one of our greatest ever bowlers. I saw somebody who had the potential to knock on the door of a professional career and then see what happened.

"His skill with the ball was evident from the start but his development of those skills has made him the world-class bowler he is."

'Right up there with the quickest'

Anderson broke into the Lancashire first team in the early 2000s. Warren Hegg was the veteran wicketkeeper with the best view in the house.

"He was very raw and had real pace," remembers Hegg. "Even though that came with a slight lack of direction, the potential was there to bowl seriously quick. I've kept to some very quick bowlers in my time and, in his younger days, Jimmy was right up there with the quickest.

"In the early days he relied on that pace and his natural ability to take the ball away from the right-hander - it was later that he cut it back and learned to swing the ball both ways with control.

"We had open net sessions in the middle at Old Trafford and he was a real handful to the senior players, who were used to facing quick bowlers. I was hit on the toes on numerous occasions from his yorkers because, even in practice, Jimmy was aggressive.

'He nailed it, bowling him with a perfect yorker'

Anderson had only played three limited-overs games for Lancashire when he was drafted into England's one-day squad in Australia in 2003-03 as cover for Andy Caddick. One sensational spell in Adelaide - in which he conceded only 12 runs from 10 overs - earned him a place in England's World Cup squad. Former England seamer Steve Harmison picks up the story.

"We were in Australia and he came into the nets," says Harmison. "He had an inswinger, outswinger, yorker and a bouncer, and Nasser Hussain, the captain, was raving about him. He wanted him in the team.

"You could see straight away that he was comfortable in the environment of international sport. He wasn't fazed by playing at the MCG or the Gabba.

"At the 2003 World Cup in South Africa, before the game against Pakistan, we had talked about how important it was to bowl Yousuf Youhana [who later changed his name to Mohammad Yousuf] a yorker first ball.

"In front of 20-odd thousand at Cape Town, Jimmy Anderson - our youngest bowler - absolutely nailed it, bowling him with a perfect yorker. It was great to watch and it showed he could handle pressure and deliver what was asked of him.

"In the early days, the only downside was that he had too many skills for his own good. It's only really in the last six or seven years he's learned to use the right deliveries at the right time. His ability to move the ball laterally through the air is up there with the greats like Wasim Akram and Waqar Younis."

'You could see the relief in his face'

Despite taking five wickets on his Test debut in 2003, Anderson's patchy form meant he was in and out of the England side as coaches tried to tinker with his action. In 2006, he suffered a stress fracture of his back that ruled him out for the season. During Anderson's rehabilitation, England bowling coach Kevin Shine oversaw a gradual overhaul of his technique, using aspects of his original action to help make him a better bowler than ever.

"His bowling didn't look right," says Shine. "He couldn't get into a position to get the ball out nicely and his body language was poor.

"Lancashire coach Mike Watkinson had some footage of Jimmy as a 15-year-old and it looked incredibly natural. We spoke and I also discussed the situation with [former England bowling coach] Troy Cooley.

"We agreed that Jimmy could go back to his old action so long as he got his front elbow high into his hip and went through a good strength and conditioning programme. When we chatted about it with Jimmy, you could see the relief in his face.

"It was a really slow process, taking place over months. Mike was fantastic in implementing a workload programme. Jimmy would play a game, then rest a game.

"I've still got the footage of when he was literally walking through the action. After that came a tentative jog, then he would build it very slowly over a long, long period of time.

"I don't think the remodel was a mistake - it was based on the research that was around at that particular time. If Jimmy hadn't got injured, he wouldn't be half the bowler he is today."

'The same breath as Trueman'

Anderson's growing pains continued through the winter of 2006-07, when he was ripped apart by Australia in the 5-0 Ashes whitewash down under. But it was during the following winter's tour of New Zealand that he finally made his big breakthrough. Drafted in with Stuart Broad for the second Test as frontline bowlers as Steve Harmison and Matthew Hoggard were dropped, Anderson responded with seven wickets for Michael Vaughan's team.

"I thought the team were getting a little tired and needed a new source of energy and movement," says Vaughan.

"Broad and Anderson were ready to be the leaders, the dominant force in the attack. I think we got the timing pretty much spot on because Hoggard and Harmison were just on the decline. It's never easy to drop two pals who have been so good for you, but it was the right thinking for the team.

"I didn't captain Jimmy a lot because he wasn't in the side much. When you're in and out, it's difficult to keep that relationship going with a player. I didn't find him difficult. I thought he was a talented swing bowler who could manoeuvre the ball either way. You knew he would always have that demon spell in him if he got it right.

"He's right up there. It's hard to compare eras, but Jimmy has to be mentioned in the same breath as Fred Trueman. He's that good."

'Jimmy at his absolute finest'

Since his breakthrough series in New Zealand, Anderson has not looked back. He has taken at least 35 Test wickets in every calendar year, becoming only the fourth England bowler to pass 300 in May 2013. He helped England rise to the top of the Test rankings in 2011 and has been a pivotal player in three Ashes series wins. Alongside him for much of the journey was former England spinner and close friend Graeme Swann.

"I can't tell you the whys and whereabouts of our first meeting, because it was after a PCA [Professional Cricketers' Association] dinner," says Swann. "I didn't know Jimmy that well, but he was mates with my brother because they played together at Lancashire. It wasn't until I got into the England team that I started spending some time with him and we became best friends.

"My favourite story is the one time we properly fell out. We were in India, I popped into a bedroom and there was a game of Fifa going on. Tim Bresnan came from 1-0 down in the last five minutes and beat Jimmy 2-1. Bres started laughing, I joined in, and Jimmy didn't want to have a go at Bres so he picked on me.

"'I've never liked you,'" he said and called me a name, then stormed out. He didn't speak to me for three days. He blanked me at breakfast, at training, on the bus, everything. Three days later he said 'y'all right?'. 'Is that it then Jimmy?' I asked. 'Yeah, you got what you deserved.'

"I've never seen a bowler look more dangerous in any game of cricket than Jimmy did against Pakistan at Trent Bridge in 2010. He took 11 for about 50, bowling fast and swinging it both ways. We were getting loads of catches in the slips - we had about seven of them at one point.

"That was Jimmy at his absolute finest. He was our match-winner, the best swing bowler in the world.

"He was the one that the ball always got thrown to at any point in a Test when you needed a wicket and, nine times out of 10, he delivered."