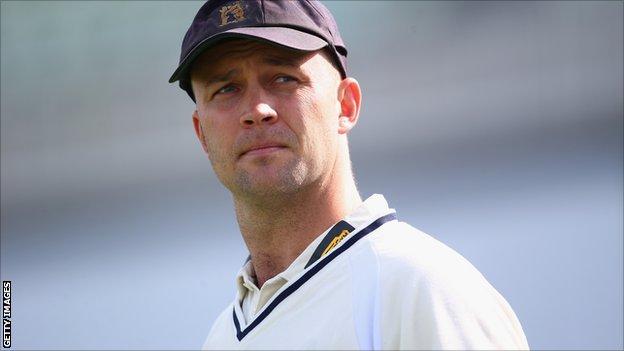 After the first session of day one of the game was washed out, the visitors reached 229-2 before slipping to 256-5 at Chester-le-Street.

Ian Westwood, returning after a spell out with a broken finger, hit 40 before Trott and Porterfield (90) added 131.

But England seamer Graham Onions (0-60) struggled on his return from injury.

Onions had been sidelined from first-team action since May because of a back problem, but Durham were indebted to Australia seamer John Hastings who took 3-52.

Trott, meanwhile, made his highest score of the season in his second first-class game since taking a break from cricket in April because of "anxiety" problems.

"I spoke to Peter Siddle about bowling to Jonathan Trott in Warwickshire's last match, when he tested him with the short ball.

"I thought I would try the same plan, but he played it quite well. He got under a couple and rode a couple more round the corner."

"For the second week in a row Durham captain Paul Collingwood put the opposition in and then looked on as his side struggled to take wickets, even with Graham Onions back after two months out with a back injury.

"The loss of the morning session means Durham have now lost nearly 700 overs in the County Championship this season. Although the season doesn't feel as bad as soggy 2012 the stats are starting to point to that.

"A partnership of 131 for the 3rd wicket from William Porterfield and Jonathan Trott, looked like it was going to steer the game away from Durham.

"However both players went towards the end of the day and with the futile decision to put Chris Wright in as a night watchman, he went for 4, the scoreboard suddenly looked a lot brighter from a Durham perspective at 256-5."