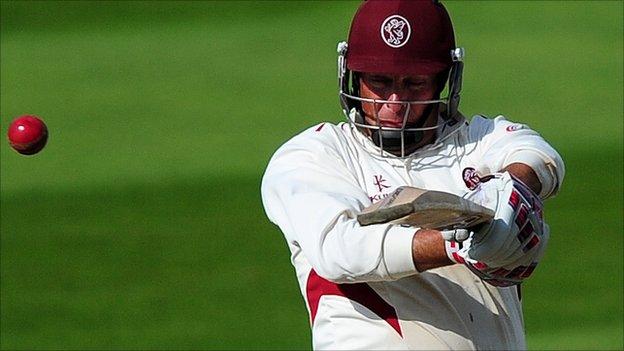 Trescothick reached 124 and was given excellent support by Peter Trego (77).

Craig Kieswetter was forced to retire hurt with a laceration under his right eye and a suspected broken nose after being hit by a David Willey bouncer.

Willey ended day one at Wantage Road with figures of 3-74 while Olly Stone took 3-95 on a day Somerset edged.

Somerset captain Marcus Trescothick said: "The new ball was tricky with wickets in the morning and tonight.

"I was delighted (with his 124) because it was really tricky this morning and I didn't feel like I was seeing it very well and then I had to work hard."

As for Kieswetter, Trescothick says that the full extent of the damage is yet to be realised.

He added: "He's still being assessed. He'll see people, we're going to pop in and see him in a bit and we'll get to know a bit more after that.

"It wasn't particularly nice and it was a nasty situation when we were out there."