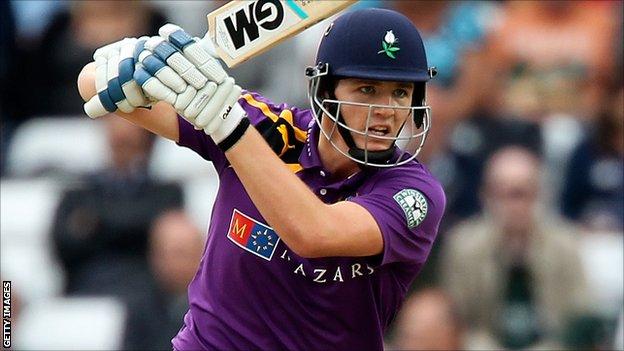 Yorkshire remain on track to reach the T20 Blast quarter-finals after an unbeaten 67 from Alex Lees helped guide them to a 59-run win over Derbyshire.

Along with Kane Williamson's 41 and Andrew Gale's 34, Yorkshire set a total of 183 but Derbyshire fell well short.

It started badly for the North Group strugglers when opener Wes Durston was bowled by Williamson for a duck.

Azeem Rafiq was the pick of the bowlers taking 3-26 as the Falcons were skittled for 124 with 15 balls left.

The result sees Yorkshire move up to second in the table having played 12 games, while for Derbyshire it was their 10th defeat from 12 games this season.

"They probably got 25 too many and although we got a good start, when the spinners came on it was pretty difficult to score.

"The innings by Alex Lees changed the game, he struck the ball extremely cleanly and while it was not good to be on the other end of it, it was good to watch."

"I thought the way Alex Lees batted was nothing short of sensational, he read the situation very well and made sure he was there at the end.

"At the end of the day you have to get your skills right and the way we bowled and fielded was fantastic."