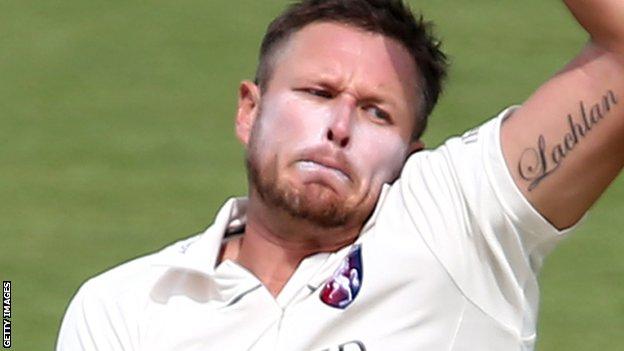 Pace bowler Mitchell Claydon took 5-77 as Leicestershire collapsed to just 217 all out on the first day at Grace Road.

Opener Angus Robson made 56, but the home side only managed a bonus point thanks to a stand of 54 between Rob Taylor (37) and Jigar Naik (25).

Charlie Hartley marked his debut with the final two wickets before Kent struggled at the start of their reply.

Veteran Charlie Shreck (2-29) led the Leicestershire comeback as the visitors finished the day on 106-5, 111 behind.

Earlier in the day, Claydon, whose figures were his best for Kent, was soon among the wickets after they elected to field, reducing Leicestershire to 97-4 from 23 overs before dismissing Robson shortly after reaching his half century.

It was the opener's eighth fifty in the Championship this season, but so far his only hundred came in the recent tour game against India.

The home side are still looking for their first Championship win of the summer, but Shreck gave them hope of a first-innings lead if they can make further inroads on the second morning.

He struck first when Rob Key gave a catch to mid-wicket and then removed Sam Northeast with the help of a superb catch from Greg Smith.

"I did not think there was much wrong with the pitch.

"It was a mixture of their bowlers putting the ball in good areas and our batters not showing the discipline needed for four-day cricket."

"Fifteen wickets fell on the opening day, but how many of them were batsmen's decision-induced would be up for debate.

"The day had much to commend it with inspired bowling from Mitch Claydon, a couple of wickets on debut for Charlie Hartley, one amazing catch from Daniel Bell-Drummond and a gritty fightback from Leicestershire in the field.

"Who says the four-day game can't be entertaining. This first day certainly was."