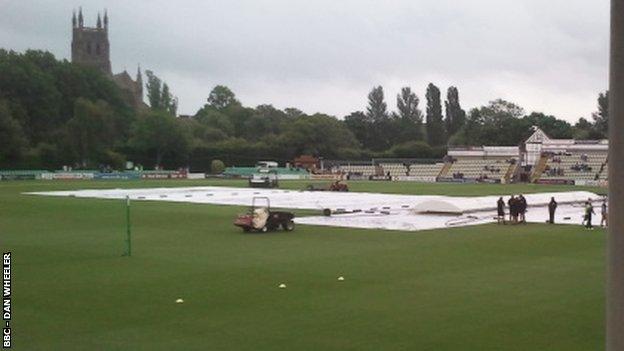 Rain began to fall right on the scheduled 17:30 BST start time against Yorkshire and did not let up until the game was called off two hours later.

Last Friday's game at Worcester against Nottinghamshire was also rained off.

The four points they got from those two wash-outs keeps them top of the group ahead of Sunday's game with Lancashire.

The leaders take on second-placed Lancashire, who are level on points, knowing that the winners would be just one step away from booking a quarter-final place.

Worcestershire had won six T20s on the trot before their two wet Fridays, while Lancashire, who beat Steve Rhodes' side in Manchester by 12 runs in May, will also be coming off the back of two successive wash-outs.

Their game against Lancashire was also called off because of incessant rain, as was the Roses match against Yorkshire at Headingley last Friday night.

The Tykes are the most weather-affected team in this season's competition, having now had three of their 10 games lost to rain.