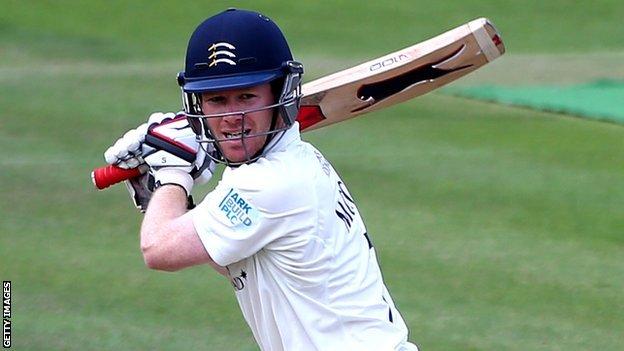 Northants ended their seven-game losing run after keeping Middlesex's attack at bay to secure a draw at Lord's.

England batsman Eoin Morgan reached 81 not out off 96 balls before the hosts declared for the second time in the match, on 199-5, a lead of 303.

The visitors were 82-3 off 276 balls when the two sides shook hands.

The draw was Northants' second of the season and they remain bottom of Division One, 60 points adrift, having lost all their other matches.

They suffered an early alarm when Stephen Peters was caught at short square leg off Steven Finn and James Kettleborough fatally misjudged a Tim Murtagh delivery, losing his off stump as he offered no stroke.

But James Middlebrook (22) and Matthew Spriegel (29 no) were defiant at the crease, facing 104 and 117 deliveries respectively.

Earlier, Morgan returned to the type of form that has seen him score 570 first-class runs at an average of 63.33.

He added 68 with first-innings centurion Dawid Malan (37) and struck two sixes and nine fours before the declaration was made.

"It's a tough one to swallow, not beating the bottom club. No disrespect to Northants, but in our position we would expect to beat them.

"I think we were one wicket away, actually, and if we'd split the Steven Crook-Andrew Hall partnership early in their first innings I think it would have been very different.

"I don't think we bowled or fielded as well as we can in this match, and we are not maintaining pressure enough with the ball.

"The pitch was still a featherbed, with nothing in it for our spinner. I don't think declaring a bit earlier would have made any difference, though."

"We have had a dreadful losing streak with seven defeats in a row, so it was important for us to stem the tide.

"We are happy enough to come away with the draw, and we played some better cricket in this match and, obviously, the stand of 144 between Steven Crook and Andrew Hall went a long way to earning us the draw points.

"I thought Middlesex might have wanted an extra 10 overs or so at us, but the chase they offered us was never really on."

"Northamptonshire badly needed to end their dismal run of seven consecutive Championship defeats and, hopefully, they can build on this going into one of their most intensive periods of the season.

"While it is asking the near-impossible for Northants to win four out of their remaining seven games of the season, their resilience and resolution should set a standard to follow.

"It may be more realistic to hope that any confidence built up from this game will seep into their T20 campaign where they still have hopes of a quarter-final place."