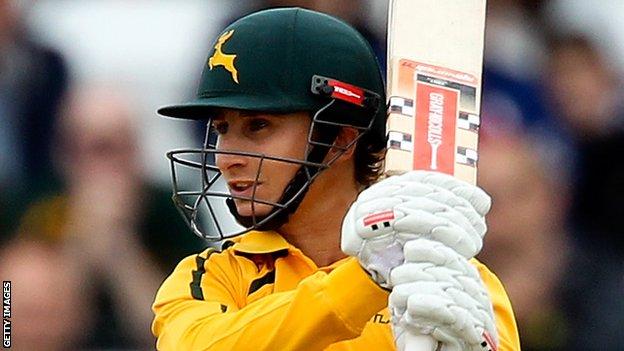 Nottinghamshire defended just 143 as they earned a 22-run win against Yorkshire in a low-scoring game.

Notts picked up a host of early wickets to leave the visitors 69-5, before Tim Bresnan (28) and Adil Rashid (21) turned the tide with some lusty blows.

Taylor's 38-ball innings, which included five fours, a six, and plenty of singles, proved to be match-winning after Notts had stumbled to 26-3 on what looked like a flat pitch.

His fifth-wicket partnership of 48 with debutant all-rounder Franklin, who signed following Peter Siddle's return to Australia, helped the hosts to 103-4, but his dismissal by Tim Bresnan (2-31) saw the innings stutter again before Taylor and the lower order hit 25 off the last two overs to finish on 143-9.

The reply saw Yorkshire's big-hitting Australian Aaron Finch fall for just 10 when he flicked Fletcher to Harry Gurney at a deep leg slip, and he was quickly followed back into the pavilion by skipper Andrew Gale, Jonny Bairstow and Adam Lyth.

Alex Lees hit a composed run-a-ball 37 before he picked out Taylor at mid-wicket off Patel, but Bresnan and Rashid's quickfire stand of 43 meant Yorkshire only needed 32 off the last three overs.

However, when Fletcher returned to the attack to bowl Rashid with his first ball, the runs dried up and Notts comfortably claimed their fifth win in the North Group to close the gap on leaders Worcestershire Rapids to two points.