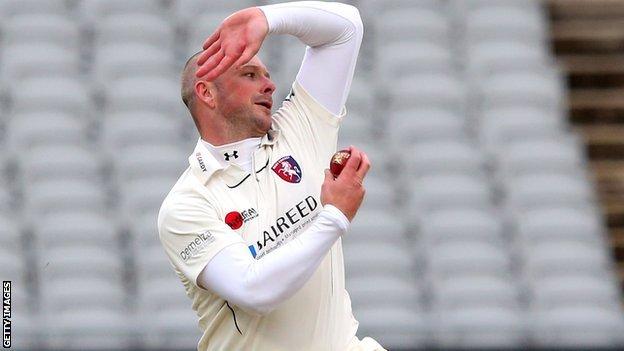 Darren Stevens claimed 6-64 in Derbyshire's second innings as Kent secured victory with a day to spare.

Having been forced to follow on and resuming on 32-3, still 186 behind, the visitors fought back from 102-7 to at least force the home side to bat again.

Alex Hughes (82) and David Wainwright (60 no) shared an eighth-wicket stand of 129 before Derbyshire were finally dismissed for 256, just 38 ahead.

Openers Daniel Bell-Drummond and Rob Key then eased Kent to a 10-wicket win.

Skipper Key struck five fours in an unbeaten 26, while Bell-Drummond added 13 not out to his first-innings century as they reached 41-0 off the first ball of the 11th over.

The victory was Kent's second in the Championship this season and the perfect way to bounce back from an innings defeat by Glamorgan at Cardiff.

It also lifted them up to fifth in the Division Two table. However, the club were afterwards given a warning for preparing a pitch rated as "below average" by an England and Wales Cricket Board pitch panel.

"The pitch started out very dry, and a few misbehaved - especially with the new ball - but we still didn't bat as well as we should.

"We have to start staying in games better than we are doing at the moment.

"It's our first innings which is the real problem, and it's something we have to address."

"It is a result that will give Kent much satisfaction as they bounced back from an innings defeat at Glamorgan, but Derbyshire look a shadow of the side that was playing Division One cricket last season.

"The outstanding performance of the final day was the eighth-wicket stand between Hughes and Wainwright, seeing off the game's most potent bowler, Darren Stevens, and the grip and zip from spinner Adam Riley for a whole session.

"Kent effectively won every other session of the match though, and Bell-Drummond's patient maiden Championship century looks even better on the last day than it did on the first.

"For Kent, it is a big win and a day off to rest weary limbs, for Derbyshire it is time for some soul-searching."