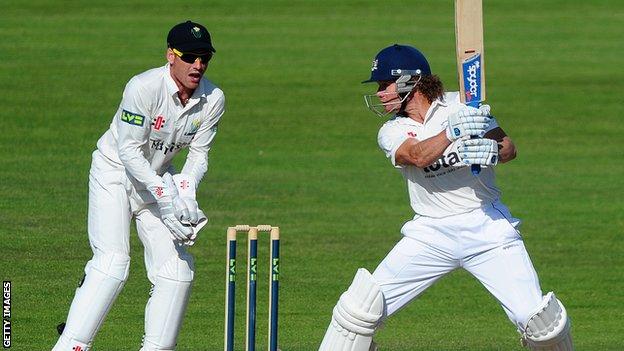 Gloucestershire batted out the majority of the final day to secure a draw against Glamorgan at Bristol.

Trailing by 224, Will Tavare faced 167 balls for his 41 to frustrate Glamorgan's bowling attack, but the hosts slipped to 105-5.

"Gloucestershire again batted with discipline to save the game for the second match in succession. The pitch was unresponsive, however, which didn't help their attack beset with injuries.

"This was the last game at Bristol until September, and Gloucestershire will probably be happier on grounds more likely to yield a result."

Glamorgan head coach Toby Radford told BBC Radio Wales he was unhappy with the state of the pitch:

"It was heartbreaking for the seam bowlers and the spinners alike. It didn't really turn, there was no pace in it.

"I think if you wanted to stay in you could stay in and clearly that's all Gloucestershire wanted to do. When they batted in this game they just didn't want to be dislodged so I think you needed a JCB to get them out to be honest.

"Obviously disappointed not to finally get the win, or the points that come with the win, but the performance from the start was excellent. I felt we dominated the game really and couldn't quite cross the line in the end."