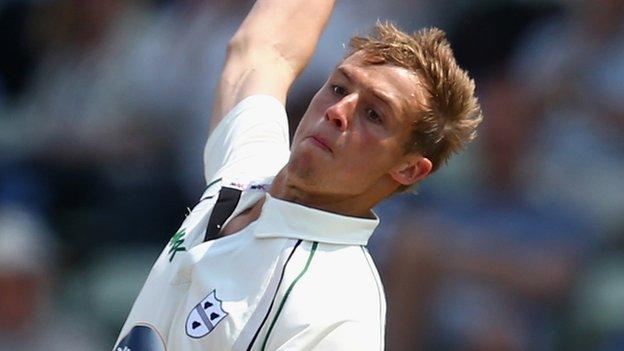 Worcestershire ended day two with a slender 35-run lead over Leicestershire as they fought back in Division Two's bottom versus top battle at Grace Road.

After bowling out the leaders for 237 on Sunday, Leicestershire could only forge a first innings advantage of 41 as they were dismissed for 278.

Morris gets into top gear

And Worcestershire then closed on 76-1, with skipper Daryl Mitchell on 44.

After resuming on 58-2, Leicestershire looked in early trouble when Greg Smith was trapped leg before wicket by Jack Shantry without any further addition to the score.

Cobb and Sarwan dug in for the fourth wicket before Shantry and Morris, taking his first four-wicket haul in first-class cricket, returned to remove them in successive overs on the same score.

Niall O'Brien and Dan Redfern then added a further 56 before wickets began to tumble again and there was one more damaging partnership for the visitors when Nathan Buck and Charlie Shreck put on 38 for the last wicket.

Worcestershire were soon hit by the loss of Matt Pardoe, but Mitchell and Tom Fell (24no) have so far put on 58 for the second wicket.