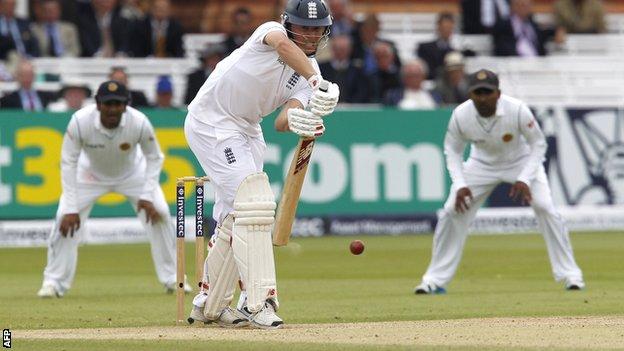 Without Gary Ballance's superb century, England could have been facing defeat in the first Test against Sri Lanka at Lord's.

When Matt Prior fell, the hosts were in serious trouble at 121-6 and the lead only 243.

But Ballance's unbeaten 104 enabled them to close the fourth day with an advantage of 389, and a great platform from which to push for victory on the final day.

These are very early days, he is playing only his second Test, but there is no praise enough for the 24-year-old left-hander.

While Ballance is no David Gower - he's not an aesthetically pleasing batsman - he reminds me of former Australia captain Allan Border, one of the toughest cricketers of his generation.

England are trying to fill the void at number three left by Jonathan Trott, and there has been much debate over whether to promote Ian Bell, batting at four in this game, or Joe Root, who scored a double hundred from number five in the first innings.

However, Ballance's knock was a classic number three's innings. I would prefer to see him play that kind of nuggety innings at first wicket down, holding the team together and then accelerating, rather than at number five.

Ballance has a very tight bottom-handed grip that means he is more likely to collect runs on the leg side than play languid cover drives.

But he has great discipline, he is strong and he can hit the ball a long way. He proved that with the six over midwicket to bring up his hundred in the final over.

His approach also showed a great understanding of the match situation as England chased quick runs late on.

Ballance was almost strokeless early in his innings - his first 50 took 130 balls - but he played more and more shots as he went on and rescued a perilous situation for England.

His late surge, alongside Chris Jordan and then Stuart Broad, raised the prospect of England skipper Alastair Cook declaring on the fourth evening and giving his bowlers a chance to make inroads.

Whether England declare overnight or continue batting on Monday, Sri Lanka will need to score at comfortably more than four runs an over.

That means Cook can set pressurised fields and simply tell his bowlers to run in, chase wickets and not worry about conceding runs.

"Sam Robson has a problem around off stump and unless he shows something different I think his place is in jeopardy already. Footwork and judgement are the key areas and if you are not sure what to leave you are in trouble. Cook, we are still waiting for him to return to form."

Perversely, England might have had a better chance of winning this Test had they been bowled out on Sunday, leaving Sri Lanka chasing a more realistic target and persuading their batsmen to play more freely than they will now.

England's top-order collapse is a cause for concern, though.

Cook and Sam Robson failed again and, while it is hard to draw conclusions on the basis of one Test, the debutant has shown a flawed technique.

He plays with his bat ahead of his pad and has a tendency to be squared up. If the bowler finds the slightest movement, Robson is asking for trouble.

He may be nervous and he needs time to settle, but some improvements must be made if he is to survive in Test cricket because opposition bowlers will pick up on those technical problems.

Jordan, on the other hand, gave great support to Ballance in making 35, and looks the real deal as an all-rounder. He is a very useful addition and a real find for this England side.