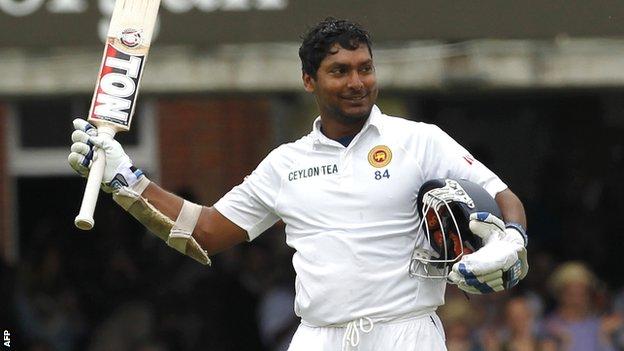 The masterful left-hander filled a rare gap on his CV with 147 as Sri Lanka comfortably avoided the follow-on target of 376, with Mahela Jayawardene scoring 55 and captain Angelo Mathews an unbeaten 79.

"Sangakkara underlined his status as a modern batting great. He has always been a model of discipline and concentration, a very graceful, silky player who is an absolute master of his craft."

But after Sangakarra had gifted Moeen Ali his first Test wicket with a tired cut into Matt Prior's gloves, Liam Plunkett and Chris Jordan each claimed a scalp to leave the tourists on 415-7 in reply to England's 575-9 declared on a flat pitch.

It was just reward for England's bowlers, who strained every sinew but had to wait until the final hour of the day to really impose themselves on their opponents on a wicket offering precious little bounce or sideways movement.

Blocking England's path for most of the day was Sangakkara, who was calmness personified as he drove, pulled, pushed and clipped his way to a 36th Test century.

Having come into the series with an average of just 30 in England, compared with a career mark of 58, he answered any lingering questions about his ability to thrive in northern-hemisphere conditions.

And in earning a place on the Lord's honours' board, two weeks to the day after his first one-day century at the 'home of cricket', he achieved a feat that proved beyond fellow modern greats Brian Lara, Sachin Tendulkar, Ricky Ponting and Jacques Kallis.

Most Test runs in partnership

"A hundred at Lord's is something I always wanted," Sangakkara told Sky Sports. "Coming on this tour, probably my last in England, I just wanted to enjoy it. If it happened, it happened.

After Sri Lanka resumed on 140-1 under leaden skies, England struck when James Anderson surprised Kaushal Silva with a short ball that the batsman deflected to Prior.

Far from a breakthrough, however, the wicket merely brought together Sangakkara and Jayawardene, whose 126-run stand moved them ahead of former Australia opening pair Justin Langer and Matthew Hayden as the third most prolific Test partnership of all time.

Midway through the afternoon session, Sangakkara brought a packed Lord's to its feet when he caressed Joe Root through the covers for four to bring up his century from 182 balls. And, in the following over, Jayawardene completed his fifty from 88 deliveries.

It took the new ball to provide the spark England craved as Stuart Broad speared a delivery through Jayawardene's defences and trapped him lbw.

But Sri Lanka retained the initiative as a partnership of 96 between Sangakkara and Mathews took them past the follow-on mark.

England's sprits were lifted by an unexpected twist as Moeen sent down a short, wide ball that Sangakkara edged through to Prior.

Prasanna Jayawardene could only add six before he fell into a trap set by captain Alastair Cook, glancing Plunkett to leg slip, where Ian Bell took a sharp catch to his right.

And the picture became rosier still for the hosts when Jordan found some away swing to induce an edge from Nuwan Kulasekara.

If England can wrap up the Sri Lanka tail early on the fourth day, they may yet have time to make life very difficult for the tourists in their second innings.