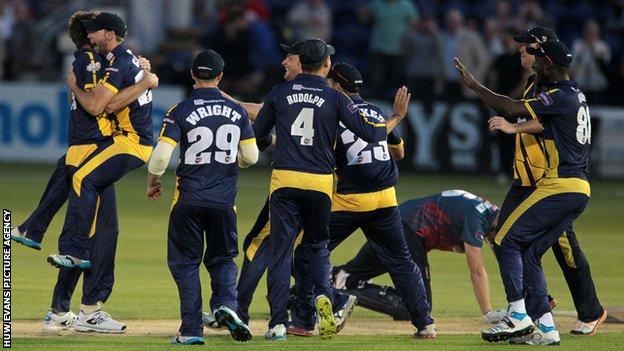 Glamorgan captain Jim Allenby says the draw with Kent could prove to be a valuable point in the race for a place in the T20 Blast last eight.

Kent needed just three runs off the final over from Michael Hogan to win.

But Hogan dismissed Adam Ball and Mitchell Claydon off successive deliveries before Doug Bollinger was run out off the final ball of the match with the scores level.

"We've got a point and it keeps us trucking along," Allenby said.

"It keeps us gaining points that we need to get what we hope will be a home quarter-final."

It was an unbelievable game of cricket. What a game to watch that must have been

Glamorgan are third in T20 Blast's South Group having won three of their six games so far and host Surrey next Friday.

Darren Stevens's knock of 71, his highest T20 Blast score this season, looked to have steered Kent to victory.

But the visitors lost Ball (10), Claydon and Bollinger in the final over as they ended 177-9.

Kent were one ball and one run away from victory, but after Hogan ( dismissed both Ball and Claydon, Bollinger was run out on the final ball.

All-rounder Allenby said the group game was a thrilling game to be involved in.

"It was an unbelievable game of cricket. What a game to watch that must have been," Allenby said.

"A tie's a fair result. Kent will be a bit disappointed because three off the last, but we're over the moon that we managed to come back in and get that point.

"Having said that we played good cricket for most of the game and slightly disappointing not to get the two points."