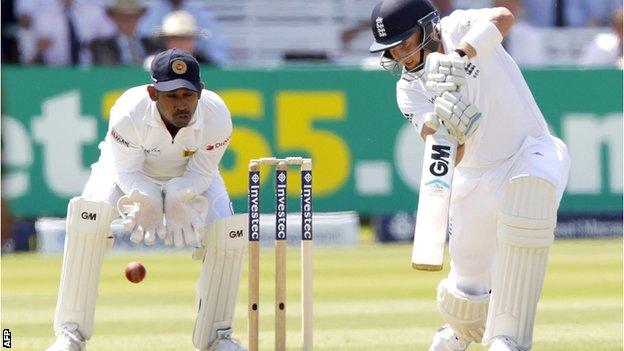 Joe Root scored a composed unbeaten century as England began their recovery from a dismal winter by reaching 344-5 on day one of the opening Test against Sri Lanka at Lord's.

In their first Test outing since the 5-0 Ashes whitewash by Australia, an England side featuring three debutants slid to 22-2 and 120-4 after being put in to bat on a green-tinged wicket.

But Ian Bell (56) and Moeen Ali (48) started the fightback before Root and Matt Prior punished a tiring attack in the evening sunshine.

Yorkshire batsman Root, batting at five in a new-look top six, reached his third Test century in the penultimate over of the day to finish 102 not out and Prior batted with increasing authority for an unbeaten 76.

"Matt Prior played superbly. I like a wicketkeeper who comes in at six or seven and takes the game by the scruff of the neck. Sometimes he plays shots too early. He got the bit of luck early on but he played beautifully."

Both players had been dropped in the latter stages of England's capitulation in Australia. But they marked their returns with confidence-boosting innings, albeit against a workmanlike Sri Lanka attack with little experience of English conditions.

"There's nothing that beats Test cricket and the challenge of scoring runs in the first Test of the summer after the winter we had was something that I relished," said Root.

"After a difficult winter the way Matty came back into the side was testament to his character and ability."

As England began their new era under coach Peter Moores, a capacity crowd enjoyed a captivating day in which the hosts battled hard to wrest back the initiative that Sri Lanka had gained in the early part of the day.

With the experienced trio of Kevin Pietersen, Jonathan Trott and Graeme Swann all departed for different reasons, England handed out three new Test caps for the second consecutive match for the first time since 1937-38.

But a new era produced familiar failings as their top order succumbed to reckless shots.

Debutant Sam Robson and Gary Ballance were caught behind pushing at deliveries from Nuwan Pradeep they should have left, and in between captain Alastair Cook played on to Nuwan Kulasekara attempting to cut a ball that was too close to his stumps.

Cook has now gone 21 Test innings without scoring a hundred, a sequence comprising Ashes series home and away.

Ian Bell, named England player of the year on Monday, batted with characteristic poise and purpose for 56, before he was lbw - on review - aiming across the line at Shaminda Eranga.

If Moeen was feeling the pressure as he walked out to bat for the first time in Test cricket at 120-4, he showed little sign of it.

Looking confident and energetic at the crease, the Worcestershire batsman, who has been awarded an England increment contract for 2013-14, struck six fours and lofted his first ball from Rangana Herath over long-on for six.

The left-arm spinner gained his revenge, however, when Moeen took a big swing at a flighted delivery outside off stump and edged to slip.

Prior survived the closest of lbw shouts to his second ball when Herath struck him on his back leg fractionally outside the line of off stump.

But as Sri Lanka's attack tired and the pitch dried out, he scored heavily through his favoured off side and marched to only his second fifty in 19 innings from 81 balls.

Root, meanwhile, scored all around the wicket as he posted his first century since making 180 against Australia at the same ground last year to round off a pleasing day for Moores and his men.