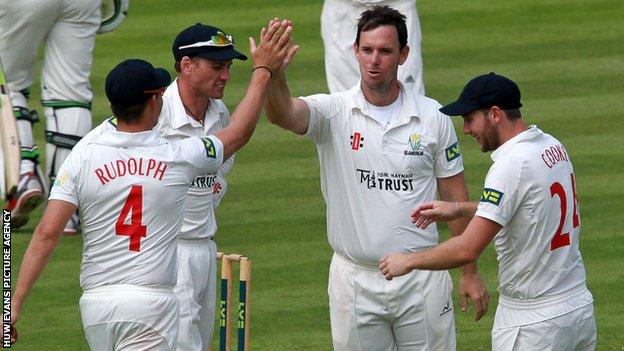 Glamorgan enjoyed a productive day in the field as Kent stumbled to 236-8 in their Championship game at Cardiff.

The visitors began well as Rob Key (63) and Daniel Bell-Drummond (39) shared an opening partnership of 74.

Neither side is in the promotion picture at present, having won only one of their opening seven games.

However, it was a proud moment for Cowdrey as he became the third generation of his family to take the field in a Championship match for Kent, following grandfather Colin, father Chris, both former England captains, and uncle Graham.

He went in at number three but his innings only lasted 21 deliveries before he was caught at short leg off Salter for nine.

Bad light eventually ended play four overs early after Hogan had bowled Ball with a delivery that nipped back off the pitch and Harmison was caught by Will Bragg at short mid-wicket.