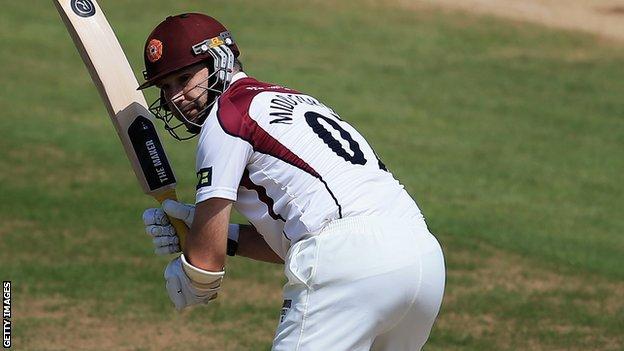 They won the T20 competition and promotion to Division One of the Championship in 2013, but are winless in four-day cricket this summer.

"It's different. There's no doubt about it," Ripley told BBC Radio Northampton.

"It wasn't all a bed of roses last year, but there's no doubt this year it's been cranked up a bit with players scratching around or a bit of form."

He continued: "We've had quite a lot of injured players. It's been challenging, but I've still enjoyed it. I've got a great job."

Northants struggled to bring in an overseas player at the start of the campaign and have suffered a number of injuries, most notably batsman Alex Wakely for the entire season.

Ripley's side are bottom of the table after losing their last five Championship games and chief executive David Smith recently described their batting as "unacceptable".

But there were promising signs for Northants in last week's four-day draw against tourists Sri Lanka, with 21-year-old batsman Rob Keogh scoring his second first-class century, having made 221 against Hampshire last year.

"We saw last year with the double hundred at Hampshire and the fifty in very tough conditions at Worcester that he's got some ability and a lot of desire," added Ripley.

"He's also a very fine fielder to have in your Championship side. He's got a lot going for him."