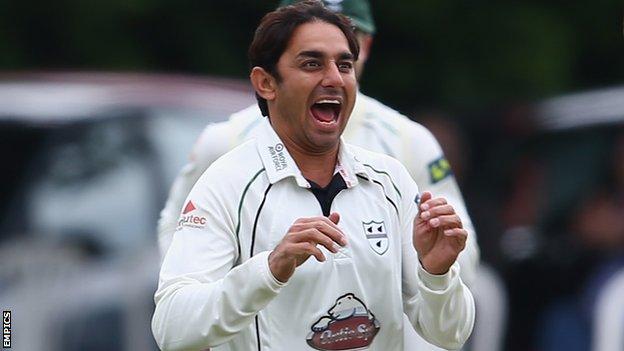 Hampshire folded from 107-1 just before lunch as they lost their last nine wickets for 112 to be bowled out for 219, with Ajmal taking 7-68.

Rain threatened to end play for the day but a 17:45 BST restart was possible.

And Ajmal struck again as Hampshire closed on 31-1, with opener Michael Carberry unbeaten on 22.

Resuming on 10-1 at the start of play, Hampshire looked untroubled in the morning session as Adams and Smith added 107 for the second wicket.

But Ajmal trapped Adams leg-before for 40 and then removed Smith, who was bowled for 67 trying to pull a low, quicker delivery.

The last four wickets added just 14 runs, with Charlie Morris getting in on the act before Ajmal polished off the innings.

After a two-hour break, the follow-on was duly enforced, and the Pakistan spinner showed he was not finished by returning to have Adams lbw for the second time in the day.

Weather permitting, Hampshire will now resume on Wednesday morning still trailing by 152 and, as their first target, looking to avoid an innings defeat.

"Hampshire were 'Ajmaled' on a pitch that did not offer much turn. Flight, guile, variation in pace, and the occasional bit of spin out of the foot marks put paid to Hampshire's batsmen.

"One or two would have been disappointed by the shots they played, even allowing for the fact they were playing against one of the world's top bowlers.

"Having said that, batting against Ajmal at New Road is not a pleasure, but watching him working his way through the lower order is one of the pleasures of the summer.

"Credit to the Worcestershire medium-pacers ,who bowled a tight line to keep one end quiet, and it was a pity the rain wiped out most of the last session, or it could have been a long one for Hampshire."