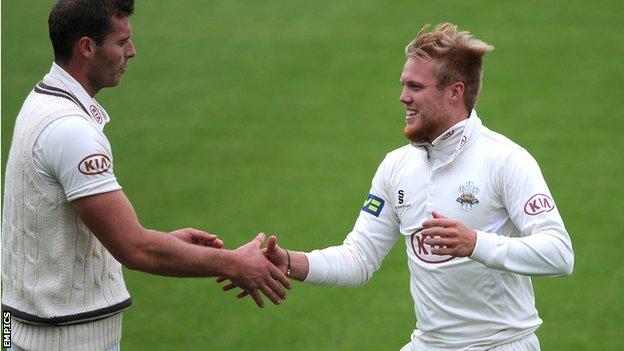 Rory Burns and Zafar Ansari shared an unbroken opening stand of 186 as Surrey totally dominated the opening day against Gloucestershire at Bristol.

The home side were reduced to 25-5 inside 13 overs after opting to bat first and were dismissed for 112.

Burns then hit 13 fours to end the day two short of a century, while Ansari was unbeaten on a career-best 84.

Seam bowler Will Gidman was miserly, conceding only 16 runs from 13 overs, but neither he nor five of his team-mates could conjure up a breakthrough.

Ansari played out a maiden from spinner Tom Smith before the close, with Burns content to wait overnight for what would be the fifth first-class hundred of his career.

"Just about the perfect day for Surrey. After the hosts won the toss and batted they were skittled for just 112 before lunch.

"Zafar Ansari and Rory Burns then proved the decision to bat first was the correct one from Gloucestershire.

"They batted untroubled for two sessions, occupying the crease and taking Surrey to stumps with a lead of 74.

"Both Burns and Ansari deserve hundreds tomorrow and Surrey will look to cement their excellent position."