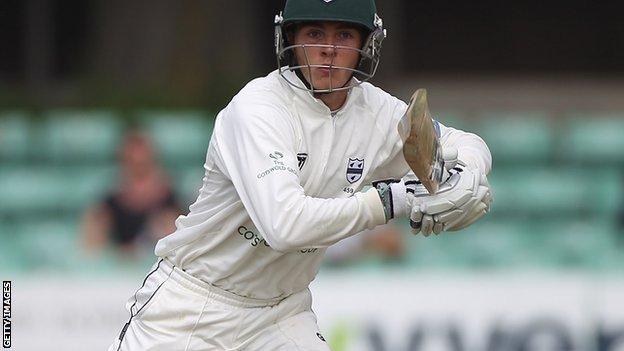 Ben Cox made his maiden century as Worcestershire edged a rain-affected day against promotion rivals Hampshire.

The highly-rated young wicketkeeper raised his career-best score for the second time this season, making 104 as the home side declared on 402-9.

He was well backed by overnight partner Alexei Kervezee (80), as well as Joe Leach (32) and Jack Shantry (29).

On briefly for just an over as a replacement fielder for James Vince, the club cricketer from Bristol, working at New Road as Hampshire's video analyst, successfully pouched a catch at mid-on off the bowling of Matt Coles.

With six overs to face, Hampshire lost a wicket first ball as Michael Carberry edged Shantry to close on 10-1.

England batsman Carberry's frustration, after waiting almost two days to bat, boiled over as he took his anger out on a water bottle.

After a delayed start for the second day in a row, Worcestershire, resuming on 175-4, passed 400 for the second innings running, earning a fourth batting point, while restricting title rivals Hampshire to only two bowling points.

But the undoubted highlight was Worcestershire-born Cox - who hit his first half century on his debut as a 17-year-old schoolboy five years ago - blasting a six and 13 fours as he reached three figures for the first time.