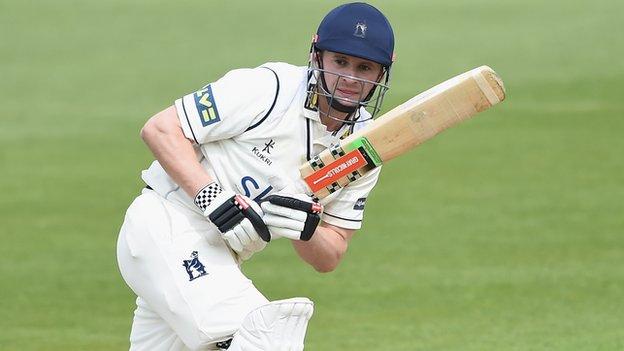 William Porterfield passed 50 for the fourth time in the Championship this season as Warwickshire made heavy weather of replying to Lancashire's first innings total of 286.

Lancashire had the better of the morning, adding 98 before being all out for 286, with Tom Smith making 50.

The Bears then batted 71 overs to reply with 130-4 by the end of a day marred only by a break for bad light.

Porterfield was still there on 51, partnered by Tim Ambrose (12 not out).

Lancashire player-coach Glen Chapple, who had earlier weighed in with 33, returned the day's best figures, sending down 11 overs for the loss of just eight runs, including the wicket of Ateeq Javid.

"Continuing his most welcome return to form, William Porterfield appeared far removed from the player who so often sold his wicket cheaply in previous seasons.

"He was painstaking, bordering on forensic, and resisted all temptation outside off stump, but his four-hour 50 was not just about clinging on; scarcely a ball passed his outside edge, and on the rare occasions bowlers dropped short, he punished them square of the wicket.

"Without him, Warwickshire might struggled to keep Lancashire's 286 in sight. They will seek to get close on day three, and then back Jeetan Patel to out-spin Simon Kerrigan."

"On a slow pitch that does not seem to be offering anything to assist the bowlers, Lancashire will feel pretty happy with their day's work.

"Reach 286 looks like a good first innings score, as Tom Smith reached his fifth half century of the season in adding vital runs alongside his captain.

"With the second new ball due in nine overs time, the Red Rose will be hopeful their first-innings total turns into an excellent score, and if the pitch can offer a little more on the third day a Lancashire win may still be possible."