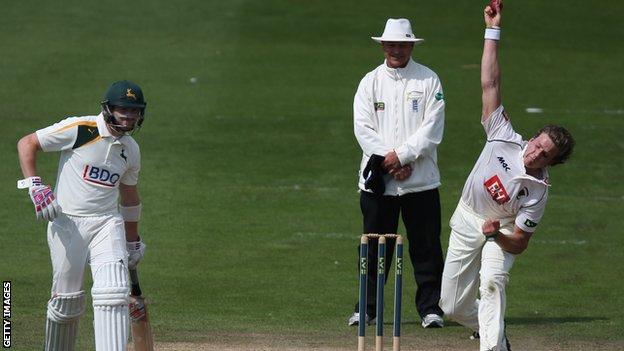 Sussex seam bowler Matthew Hobden admitted he was on a learning curve after making his County Championship debut for the club.

The 21-year-old took match figures of 4-136 in the draw against Nottinghamshire at Hove this week.

"I was a little expensive but I'm happy. You have got to be a lot more disciplined in your lines and your lengths," he told BBC Sussex.

"You can't give batsmen any width as they will punish you."

He added: "It was quite tough in that sense especially on a flat, slow wicket which didn't suit me massively."

It was a good experience and nice to get some wickets against a really good side.

Hobden, from Eastbourne, came through the Sussex academy and signed a two-year professional deal with the club last month.

Having previously made four first-class appearances for Cardiff MCCU and played in one List A game for Sussex, the right-armer was pleased to be handed his Championship bow.

"I had a feeling that I could be involved as I have been bowling well in the nets," he said.

"It was a good experience and nice to get some wickets against a really good side. It turned out alright in the end."

Meanwhile, Hobden says he is grateful to senior bowlers James Anyon, Jon Lewis and Steve Magoffin for their encouragement.

"Jon, Jimmy and Magsy have been a massive help and given me so much advice," Hobden said.

"They were constantly helping me at the top of my run up, reminding me to stay calm whatever and telling me to do what I normally do and to play my natural game.

"It helps you not to get too flustered and it is good to have them around."