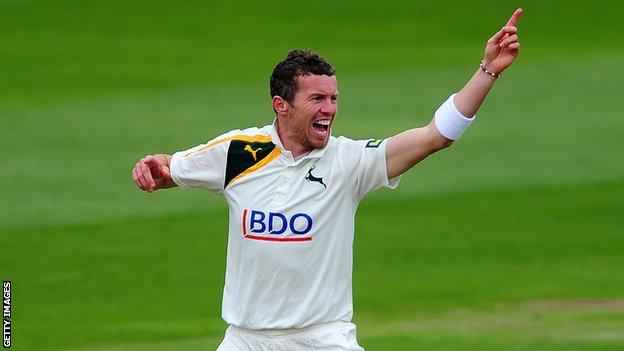 Peter Siddle brought Nottinghamshire back into contention on day one of their Division One game with Yorkshire.

But Siddle (39 not out) and Luke Fletcher (29) earned an unlikely bonus point as Notts were all out for 205.

The Australia international then removed home openers Adam Lyth and Alex Lees with the new ball before rain brought play to an early conclusion with Yorkshire 52-2.

Notts won the toss and chose to bat, but that decision backfired as Bresnan, overlooked by England for their first Test against Sri Lanka next week, caused early damage.

The seamer removed Phil Jaques (20) and Michael Lumb (45), while new-ball partner Brooks took care of the middle order, including Samit Patel for a duck.

A ninth-wicket stand of 65 between Siddle and Fletcher took Notts past 200, and they carried that momentum into Yorkshire's reply.

Lyth and Lees were both caught behind by Chris Read as Siddle claimed 2-13 from his seven overs before the close.

However, with captain Andrew Gale at the crease on the second morning and international batsmen such as Jonny Bairstow and Aaron Finch still to come, the hosts will feel confident of posting a first-innings lead as second-placed Yorkshire look to close the gap to Division One leaders Middlesex.

"The visitors stumbled to 139 for 8 and were then rescued by a late partnership from Peter Siddle and Luke Fletcher.

"After his 39 not out, Australian paceman Siddle removed the in-form Yorkshire openers Adam Lyth and Alex Lees cheaply before rain brought an early end to the day."

"Peter Siddle came to Nottinghamshire's aid on a day when not much went right for the county.

"His attacking knock helped his side to pick up an unlikely batting point and then the Australian removed both Yorkshire openers with the new ball.

"Wickets in his first spell have been in short supply this term for Siddle but his excellent and timely opening burst means Notts are still in this contest, despite an indifferent day with the bat."