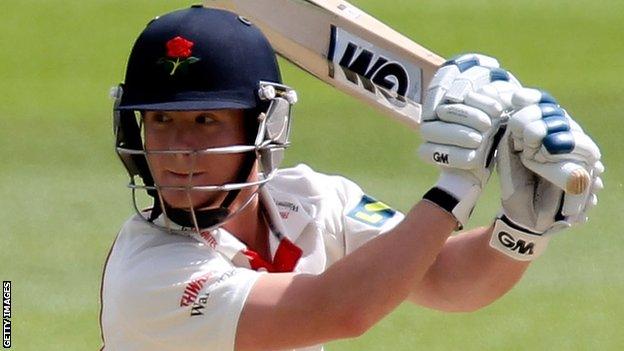 The 19-year-old opener hit a gritty 59 before he was bowled by New Zealand off-spinner Jeetan Patel (3-52).

A number of batsmen got starts, including Andrea Agathangelou (31) and Steven Croft (30), but England's Jos Buttler fell for a nine-ball duck.

Tom Smith was unbeaten on 21 when a downpour brought an early close.

After visiting skipper Glen Chapple won the toss and elected to bat in good conditions at Edgbaston, Chris Wright removed Paul Horton early on when he tempted him to edge behind for 12.

Davies, who scored 62 in his side's last match against Somerset, then rebuilt the innings with Agathangelou as they put on 78 for the second wicket before the latter edged Patel to slip on the stroke of lunch.

After the break Patel had the dangerous Ashwell Prince (12) caught at leg-slip by William Porterfield and ended Davies' 148-ball vigil shortly after by bowling him.

Lancashire were soon wobbling on 126-5 as Buttler nicked Wright behind in the next over before Croft and Smith batted resiliently with a watchful partnership of 49 in 166 balls.

A superb diving catch off his own bowling by Rikki Clarke eventually accounted for Croft, but there was to be no further damage as Chapple and Smith dug in before the rain came with 14 overs still to be bowled.

"Play called off for the day due to a heavy storm with 14 overs still to be bowled.

"Jeetan Patel found some turn from the Birmingham End, which yielded 3-52 from 28 overs.

"Plenty of credit should also go to Keith Barker and Boyd Rankin, who did not take a wicket, but their combined 25 overs cost only 44 runs."

"After making a solid start this morning, Lancashire will feel a little disappointed with their close of play score. A flurry of wickets during the afternoon session saw the Red Rose slip from a position of strength.

"Tom Smith and Steven Croft started to rebuild before Croft was caught and bowled superbly by Rikki Clarke falling for 30, his highest Championship score of the season so far.

"The rebuilding work will need to continue in the morning if Lancashire are to post a decent first-innings score."