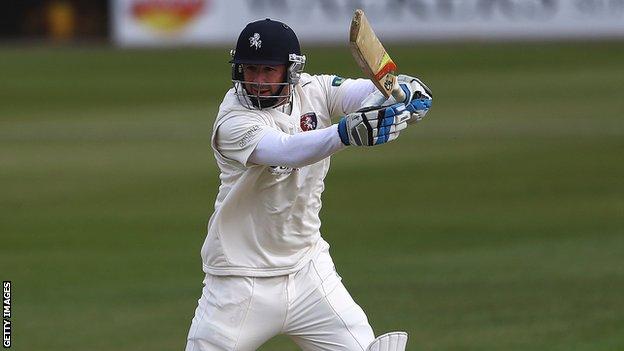 A 94-ball century from Kent's Darren Stevens was the highlight on day one of their Division Two match with Essex.

The veteran all-rounder hit 15 fours and three sixes in his innings of 105 as Kent reached 344-7 at the close.

Daniel Bell-Drummond (56) and Brendan Nash (82) put on 113 for the third wicket, while Adam Ball (30) offered Stevens good support late in the day.

However, Jesse Ryder (5-50) kept Essex in touch with the first five-wicket haul of his career.

The efforts of the New Zealand international, who had Stevens caught at deep backward point, prevented Kent from posting a more imposing first-innings total.

Kent's Ben Harmison was forced to retire hurt with only two runs to his name after being struck on the hand by Mills, and it is not known whether the left-hander will be fit enough to bat on Sunday.

"They had another Darren Stevens century to applaud, as well as a quick-fire 82 from Brendan Nash and a patient, mature half-century from Daniel Bell-Drummond, who showed maturity beyond his years.

"Once the mid-morning rain had retreated, the ground was bathed in sunshine and Kent took full advantage.

"They closed the day the happier, in the knowledge that they are in command of the destiny of this match."