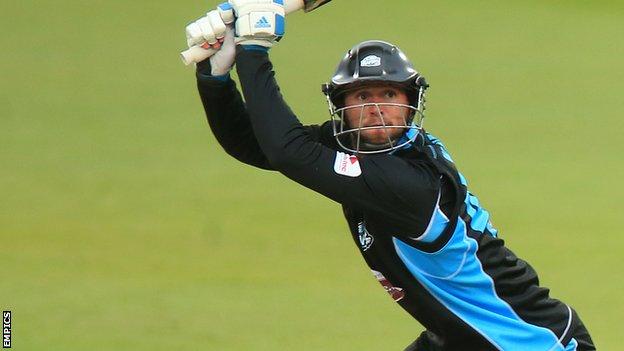 Worcestershire are top of the North group in the T20 Blast after a five-wicket win over Durham.

A wet outfield caused a two-hour delay to play at New Road, with the game reduced to 13 overs per side.

Durham were 5-2 after Chris Russell struck with his first two balls but they recovered to post 105-3, Calum MacLeod top-scoring with 43 not out.

The hosts reached their target with two balls to spare, Ross Whiteley (25 not out) sealing victory with a six.

They began Chris Rushworth's final over needing 15 runs to win, and after Gareth Andrew struck a six and a four from the first two balls, he was caught on the boundary by Ben Stokes.

But Whiteley ensured Worcestershire climbed above Lancashire at the top, while Durham remain seventh in the table after their loss.