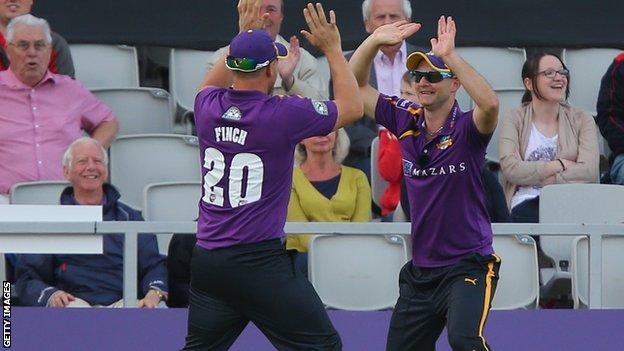 Aaron Finch's eye-catching 88 helped Yorkshire to victory over Lancashire in the T20 Blast at Old Trafford.

The hosts, who chose not to include Andrew Flintoff in their squad, posted 179-6, with Tom Smith (55) and Paul Horton (60) their main contributors.

Finch then smashed 88 off 55 balls before falling to spark a mini wobble.

But, after Lancashire were penalised six runs for a slow over-rate, Rich Pyrah's six secured a dramatic five-wicket win with three balls left.

Earlier, Finch also played a role in a spectacular piece of fielding, catching the ball after Adam Lyth acrobatically dived over the boundary rope and palmed it back to his team-mate to take the wicket of Smith.

But it was his heroics with the bat that would take his side towards the winning line, as he hit eight fours and five sixes on his way to a first T20 half-century of the summer.