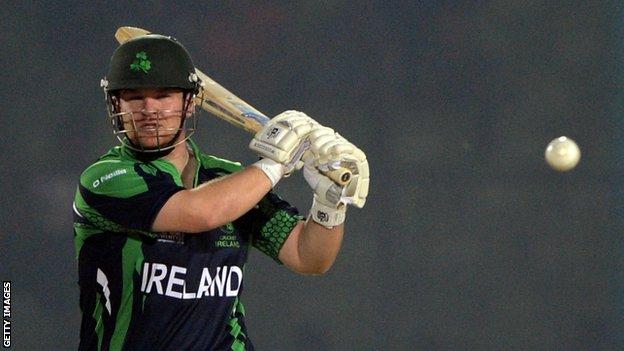 Middlesex batsman Paul Stirling hopes he can establish himself in their four-day side after scoring his maiden County Championship half century.

The 23-year-old Ireland international made 55 in the draw against Durham, which was only his second first-class appearance for the Lord's side.

"It was nice to get a chance and spend a little bit of time at the crease.

"It is another opportunity for myself to prove I can play at this level," he told BBC London 94.9.

"I've been trying to work quite hard on my four-day game. Sometimes it is going in with different mindsets in the different forms

"It is the second County Championship game I have played and I wanted to show I can go out there and play in it. I felt more comfortable as the innings went on."

Stirling joined Middlesex aged 19 in 2009 and has been a regular in the club's limited-overs side over the last three years.

However, the right-hander had to wait until May last year to make his Championship debut.

"I've played a lot of one-day cricket and know what I need to do. Hopefully that comes across in performances," he said.

"I've been trying to work quite hard on my four-day game. Sometimes it is going in with different mindsets in the different forms. Hopefully I can get that right."

Stirling, who has played 47 one-day internationals and 26 Twenty20 matches for Ireland, also took 1-45 with his off-spin bowling in Durham's first innings.

"It's a bonus when it comes out well with the ball," he said.

"Hopefully that is something I can work on now and try and become that all-rounder role, batting at six or seven.

"The challenge now is consistency and scoring runs most of the time. I need to get my head down, perform and not take anything for granted."