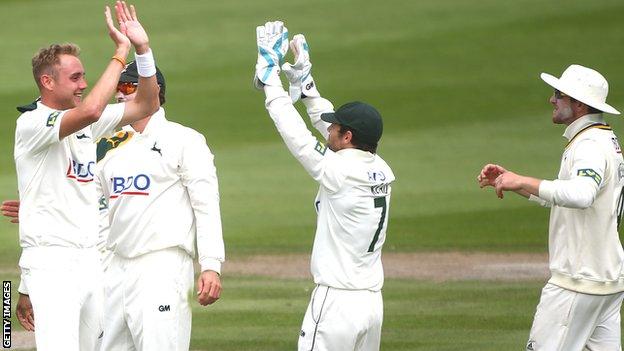 Nottinghamshire's Stuart Broad handed England a boost ahead of next week's first Test, but his side's encounter with Sussex ended in a draw at Hove.

Matt Prior, who is hoping to be recalled to England's squad for the series with Sri Lanka, was 19 not out.

And while Broad, who took three wickets in the first innings, seems certain to be included when the squad is announced on Thursday, Prior's place is less clear.

But the Sussex keeper, and England, will be pleased he came through his first game since April unscathed.

Bad weather had been forecast throughout the day, but play surprisingly got under way at 13:10 BST.

Victory for Sussex seemed out of the question as they needed a further 406 runs, but they began in positive fashion as Wells and Nash found batting easy in their stand which lasted 43.1 overs.

However, Broad shattered the stumps of Wells and had Nash caught behind by Chris Read, but they were Nottinghamshire's only successes of the day.

After an over from opener Alex Hales, who smashed 167 with the bat on Tuesday, the two captains shook hands on a draw.

The result left fourth-placed Notts 17 points behind leaders Middlesex, with Sussex two points further back in fifth, although both teams have a game in hand.

"The rain which delayed play until 13:10 and took 24 overs from the day's allocation spoilt any chance of a positive result for either side.

"For a fleeting moment when Chris Nash and Luke Wells were comfortably compiling a first-wicket partnership of 161, a run chase looked possible, but two quick wickets from Stuart Broad ended any remote thoughts Sussex might have had of victory.

"Sussex have been badly hampered by poor weather in recent weeks, and they now head to Taunton on Sunday hoping for four dry days and a chance to end a run of five Championship matches without a win."

"Another advantageous position failed to bring a positive result for Notts as the bat continued its dominance over the ball on the final day at Hove.

"A lifeless track stifled the impact of Broad and Peter Siddle, but at least the batsmen made merry, as they had done for the bulk of this contest.

"Samit Patel and Alex Hales were little short of sensational during this match. It has become the norm for Patel this season, but the return of Hales's best form was a delight for all to see.

"Notts are close to being a very good Championship side, but need to start picking up some wins, with Yorkshire at Headingley up next."