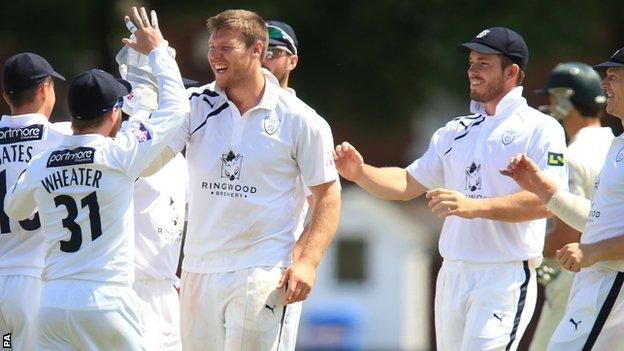 Division Two leaders Hampshire were left frustrated as assistance from the weather enabled Derbyshire to cling on for a draw at the Ageas Bowl.

The first three wickets fell to left-armer James Tomlinson, including Stephen Moore, who top scored with 25.

With closest rivals Worcestershire drawing against Surrey at The Oval, Hampshire retained their four-point advantage at the top of the table, but they were left with a feeling of what might have been, having come so close to a fourth victory of the summer.

The first ball of the day saw Tomlinson (3-16) have Paul Borrington caught behind and having been set a target of 346 by Hampshire's declaration on the third day, Derbyshire were soon focused solely on survival.

When Gareth Cross was lbw to Kyle Abbott soon after tea, they were 51-6, but David Wainwright (22) and Alex Hughes added 43 runs and used up 11 overs, before the former became the first of two victims for spinner Danny Briggs, who finished with match figures of 7-72.

Hughes batted for 115 minutes for his 18 and was still unbeaten when the weather finally came to Derbyshire's rescue.

"Nobody could have guessed that when play finally got underway at 14:30 that we would have had such a dramatic finish.

"Derbyshire, who resumed on 31 without loss in their second innings, were expected to comfortably ride out the remainder of the day, but must have felt relieved by the draw.

"Two small breaks for rain near the close - the last which meant the final five overs were not bowled - ruined a real nail-biter for the crowd and for the two teams.

"Hampshire, though, will take comfort from the fact they remain top of the table as Worcestershire also drew."