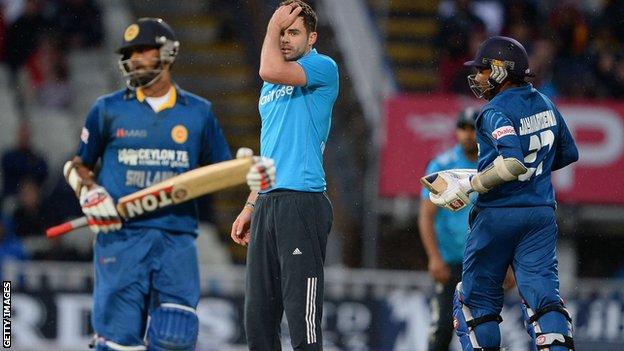 Sri Lanka eased to a six-wicket victory against England and clinched the one-day series 3-2 after a controversial encounter at Edgbaston.

Lord's centurion Jos Buttler was run out backing up at the non-striker's end by bowler Sachithra Senanayake, but England's batting was disappointing.

Alastair Cook was the only player from his side to make a half-century as England were all out for 219.

Sri Lanka won with 10 balls to spare thanks to Lahiru Thirimanne's 60.

"Sri Lanka have always been a fighting nation. Arjuna Ranatunga started it and the rest have followed. You can say they are a small nation, but they produce good cricketers."

Although the controversy surrounding the dismissal of Buttler is likely to be the main talking point of this encounter, another lacklustre England batting performance will need to be addressed as Peter Moores' second stint as head coach opened with a series defeat.

The top order failed to get to grips with the pace of the pitch and did not put Sri Lanka's bowlers under any pressure - as illustrated by the failure to score more than a solitary boundary during their early batting powerplay.

Openers Cook and Ian Bell put on 76, but the latter's dolly of dollies to Ajantha Mendis was quickly followed by the cheap dismissals of youngsters Gary Ballance (10) and Joe Root (10). Cook, who needed to play the steady foil for the big hitters, then gave away his wicket when he tried to paddle sweep man-of-the-moment Senanayake, having scored 56 from 85 balls.

Responsibility to set Sri Lanka a demanding total therefore fell to Buttler, whose incredible 121 from 74 balls at Lord's on Saturday had almost helped England seal the series. The 23-year-old had made 21 from 24 balls when Senanayake intervened.

The wicketkeeper-batsman had been twice warned by the bowler for straying out of his crease before a further transgression saw the bails removed, the spinner's appeal only upheld by umpire Michael Gough once he had consulted Sri Lanka captain Angelo Mathews.

The enraged home support made their feelings clear inside a gloomy Edgbaston as they watched their team dismissed without completing the 50 overs.

Sri Lanka raced to 51 in seven overs as they threatened to make short work of reaching the required 220.

But the introduction of James Tredwell rocked the top order. Tillakaratne Dilshan and Kumar Sangakkara fell to his spin, while Lancashire paceman Jimmy Anderson removed Kusal Perera to leave the tourists on 62-3.

The innings was brought back under control by Jayawardene (53), who shared a fourth-wicket stand of 98 with Thirimanne (60 not out), before Mathews (40 not out) saw them over the line with successive boundaries.