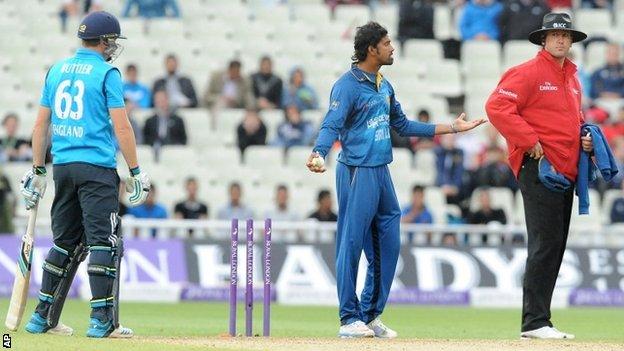 Bowler Sachithra Senanayake twice warned Buttler for straying out of his crease at the non-striker's end before removing the bails to dismiss him.

"I would stick by it," said Mathews after the six-wicket win. "What we did was completely within the rules."

"When they took the bails off, Mathews should have gone up to Buttler and said: 'Next time you're off.' People do back up. I've not played with any other player that has stood there until the ball is let go. It's a shame because it was a very good series until that point."

But England skipper Alastair Cook said: "I thought it was a pretty poor act."

England coach Peter Moores added: "Angelo has made his decision. It's not for me to comment why he did it. I was disappointed in it.

"That's all I can really say. He's made his choice and obviously he's happy with it."

Buttler was walking down the pitch as off-spinner Senanayake ran in to bowl in readiness to run.

But Sri Lanka, who clinched the series 3-2 with the win, felt Buttler was attempting to gain an unfair advantage, not only at Edgbaston but during his century at Lord's in the previous ODI.

"He was taking starts, not only this game but in the last game as well," explained Mathews.

"We gave him two warnings. I don't know what else you can do to stop him doing that, so we had to go for it."

Law 42.11 from the International Cricket Council's playing regulations for international cricket states that "the bowler is permitted, before releasing the ball and provided he has not completed his usual delivery swing, to attempt to run out the non-striker".

But not everyone agrees it is a fair way to dismiss a batsman, and there is a stigma attached to such an act.

Before giving Buttler out, umpire Michael Gough checked with Mathews that he was happy with Senanayake's appeal.

Mathews backed his bowler, but Cook said it was a mode of dismissal from which he would not have been comfortable to benefit.

"You don't know until you're put in that position, but I hope I wouldn't," said Cook afterwards.

"Yes, he had warned him, but it was not as if he was sprinting down the wicket. There's a way of doing things, in my opinion."

Former England spinner Phil Tufnell, a pundit on BBC's Test Match Special during the game, said it was a "poor" move by Sri Lanka.

"Senanayake's gone through his action," he said. "Buttler was out of his crease, but then everybody would be. There will be feeling in that England dressing room that they had some injustice done to them."

He wrote on Twitter: "Totally blame the captain... He is the man who makes the decisions and should have overturned the decision... No way to play the game."

But former England captain Alec Stewart said Sri Lanka were within their rights to appeal.

"With the laws of the game as they are, Sri Lanka are entitled to appeal," he told TMS.

"We don't like to see that, but why have that law when it can't be used?"

Fellow ex-skipper Michael Atherton told Sky Sports: "It's fair enough. The way I grew up playing in the leagues you were told to stay in your ground until the bowler releases the ball. You've got to keep your bat in the crease.

"You see a lot of batsmen wandering aimlessly out of their ground. It's a good lesson for him - don't be dozy and keep your bat in your crease."

In an unrelated matter, Senanayake had been reported to the ICC for a suspected illegal bowling action by the umpires after Saturday's fourth match in the series.

However, he is permitted to continue bowling, provided that he undergoes an ICC test within 21 days.