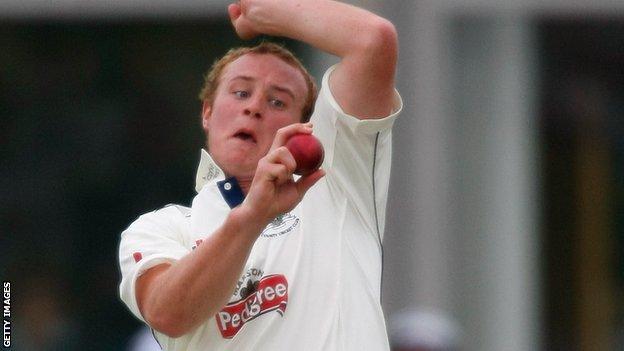 Gloucestershire bowler Ian Saxelby has been forced to retire after failing to recover from a knee injury.

The 25-year-old underwent an operation after suffering the injury against Surrey at the start of the season.

The surgery revealed the problem was worse than initially thought and the club say playing professionally is "no longer an option" for Saxelby.

He took 109 wickets in 40 first-class appearances during his seven-year career in Bristol.

"It is extremely disappointing that I am unable to continue along the path of professional cricket, but unfortunately my body is forcing me to hang up my boots," he said.

Saxelby made his County Championship debut for Gloucestershire in 2008 and became a regular fixture in the side the following year.

However, a succession of injuries - including shoulder and back problems - led to him missing the entire 2010 and 2013 seasons.

He returned to action this term, playing two first-team matches, before his injury troubles struck again.

"After recovering from my shoulder surgery last season, I'm devastated by the seriousness of this recent career-ending injury," he continued.

"I feel that I have given everything to the sport and I have thoroughly enjoyed the time I have spent in the game."

Director of cricket John Bracewell added: "He has been the consummate professional and proved to be a bowler beyond his years. He will be missed by the team and will be hard to replace."