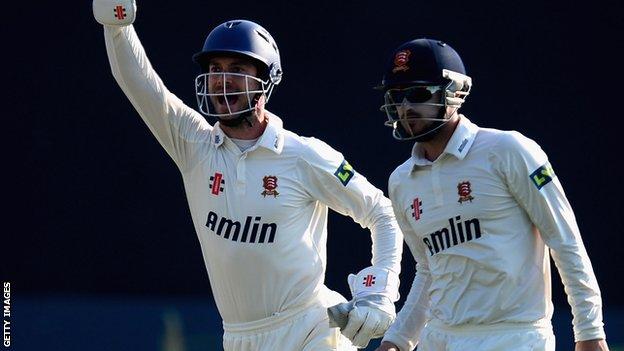 Essex wicketkeeper James Foster says he would welcome an England Test call-up, but is not being distracted by a possible international comeback.

Wicketkeeper is one of the positions up for grabs ahead of the Test series against Sri Lanka, starting on 12 June.

"If there's an opportunity, then I'll be absolutely as keen as mustard," Foster told BBC Essex.

Foster's last appearance for England was in a T20 international against West Indies at The Oval in 2009.

He has not played a Test match since the Boxing Day Test in Melbourne on the 2002-03 Ashes tour.

"But there's really no point me pondering over it. Until somebody says 'you're playing in a Test match' there's no point considering it."

Matt Prior and Jonny Bairstow kept wicket for England during the winter Ashes series in Australia, and Prior has returned to duty behind the stumps for Sussex against Notts after suffering with an Achilles injury earlier this season.

Lancashire's Jos Buttler has established himself as England's one-day wicketkeeper, but captain Alastair Cook believes he is not yet ready for Test cricket.

That has put Foster in the frame to add to his seven Test appearances, the last of which came in Australia in 2002.

His innings against Glamorgan improved his average for the season to 49, and he is content to let events take their course when the selectors name the Test squad later this week.

"I've got a very important role to do here at Essex. We're trying to make a push for promotion. That's where my focus and energy is," he said.

"If I get a phone call then wonderful. It's kind of out of my control. It's a chance for me to put some scores on for Essex. I try to do that every year."