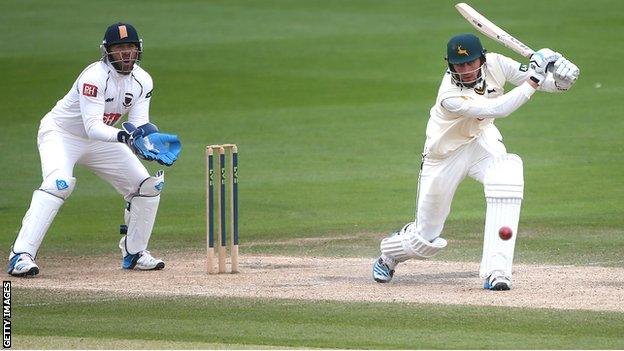 Alex Hales scored a first-class century for the first time in nearly two years as Nottinghamshire opened up a 405-run lead over Sussex at Hove.

The hosts began day three on 270-8, needing 33 to avoid the follow-on, which they achieved with ease before finally being dismissed for 355.

Long wait for a ton

Alex Hales scored his last first-class century in August 2012 against Warwickshire at Edgbaston.

Hales made 155 not out, including 19 fours and one six, in Nottinghamshire's 356-8 dec in the drawn Championship match.

He had also scored 101 two weeks earlier against Durham at Trent Bridge.

The Notts opener became the third man to pass 150 in the game as he hit six sixes and 18 fours, while James Taylor added an unbeaten 65.

Andre Adams (5-65) had Lewis caught by Hales on the boundary and then saw off Championship debutant Matthew Hobden for a third-ball duck to claim the 32nd five-wicket haul of his first-class career.

Notts began their reply after lunch and Hales soon took control, scoring the lion's share of a 128-run first-wicket stand with Phil Jaques (39).

Hales, who was loaned to Worcestershire for red-ball cricket earlier in the season, reached his hundred off only 96 balls and needed only a further 27 to pass 150.

The opener was finally out when he skied Chris Nash (2-91) to Luke Wright, 17 short of his highest first-class score.

"With bad weather forecast this game could well finish as draw. That would be a great shame with a potentially exciting final day in store

"Alex Hales's brutal innings has ensured that Nottinghamshire have a day to bowl out Sussex and win the game.

"Conversely, the wicket is a belter and Sussex might just fancy their chances of scoring the 406 further runs they need to win.

"Either way, the match has been graced by three quality batting performances and some tough competitive Championship cricket, lets just hope the weather doesn't have the final say."

"Alex Hales' welcome return to red-ball form was a joy to watch. The right-hander was in imperious form and belted six ferocious sixes before holing out.

"At the top and bottom of the day things were extremely difficult for the visitors.

"Unable to force the follow-on in the morning, they were then in an impossible position with failing light forcing the declaration to be delayed until the light improved.

"A poor weather forecast for the final day suggests it may all be academic."