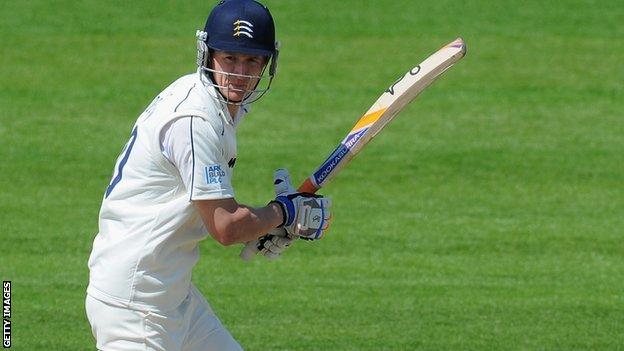 Middlesex will begin the final day 148 runs behind and struggling to avoid defeat after being forced to follow on by a Durham side looking for their first win of the season.

Roland-Jones and Stirling both claimed their highest Championship scores.

Following on, Middlesex were 90-2 at the close with Sam Robson 42 not out.

The England Test hopeful showed good composure after the early loss of Chris Rogers for one to give Middlesex hope of saving the match.

But the damage was done earlier in the day despite the visitors having batted out the first 90 minutes.

Denly and John Simpson put on 114 for the fifth wicket before Simpson was then bowled in unusual circumstances.

The Middlesex wicketkeeper tried to get out of the way of what appeared to be a beamer from Ben Stokes but the ball dipped late before hitting the wicket, and the umpires chose not to intervene.

Stokes, who apologised for the delivery, then dropped Stirling when the visitors were 179-6.

Durham seamer Mark Wood finished the first innings with 4-75 and then got rid of Dawid Malan (33) for a second time, when the Middlesex man was caught by Keaton Jennings just before the close.

"If Durham can beat the weather on the final day they might be able to get their first win of the season.

"There is still a lot of work to do, especially with an iffy forecast, but the visitors are following on and at 90-2 are still 148 behind.

"Durham had to work hard throughout the day with the ball, on a wicket which seemed to offer little to the attack.

"Joe Denly, Paul Stirling and Toby Roland-Jones put in late resistance with half centuries, while Mark Wood proved the pick of the bowlers with 4-75.

"The early loss in the second innings of opener Chris Rogers for one - the second time in the match - and number three Dawid Malan for 33 could prove crucial."

"Middlesex have given themselves a good chance of saving the game on the final day after fighting back with the bat on day three.

"Joe Denly looks in good form after a low run of scores, while John Simpson was unlucky with a full toss that hit the top of leg stump as he ducked out of the way.

"Paul Stirling looked good for his first Championship fifty, while Toby Roland-Jones also made it back-to-back half centuries in first-class cricket to add to the defiance. His form has also seen him take 17 wickets in the last three innings.

"The forecast is not great for the final day but the visitors will hope their steel can continue for what play we may see."